They could end up broke by the end of the night.

Connacht's clash with Leinster is bound to be a nervous affair as the top two in the Guinness PRO 12 meet for the grand prize at Murrayfield.

It's the first major final in Connacht's history while Leo Cullen's men are attempting to win the league for the fifth time. If their recent meeting in March is anything to go by then fans should expect a tense and tight affair with tries at a minimum, this would music to the ears of anyone that's going to be watching the game at McNamee's Bar in Loughrea though.

The bar manager Gary Kilcar has told JOE that all pints will cost just €1.99 from kick-off right up until the moment that the first try is scored.

Gary even took the time out to tell the departing Robbie Henshaw about his upcoming promotion. 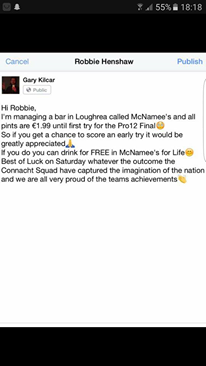 popular
Netflix has just added 23 very big movies to its library
The JOE Friday Pub Quiz: Week 308
Controversial influencer Andrew Tate banned from Instagram and Facebook
Pilots fly over destination airport at 37,000 feet because they were both sleeping
Fine Gael announces special screenings of Michael Collins movie in 19 cinemas across Ireland
One of 2022’s best hidden-gem comedy series is available to stream
Passenger plane dropped 1,200 feet in a minute without pilots noticing
You may also like
4 months ago
Scottish Parliament official dies during rugby game in Dublin
5 months ago
Every Guinness fan needs to try these brand new experimental beers
6 months ago
"Samaritans saved my life" - Brent Pope praised for honest interview on Tommy Tiernan Show
1 year ago
Four Irish players propelled into Lions debate after England hiding
1 year ago
Craig Casey and Johnny Sexton combination backed for Italy clash
1 year ago
Defence grows for Billy Burns after one of the roughest days of his rugby career
Next Page