As a former Ireland Sevens player and an Olympian, Greg O'Shea would fancy his fitness chances against most comers.

Coming off a two-week holiday though, and travelling by planes, trains and automobiles, though, he admits his fitness edge was not at its' sharpest. When he was faced off against a Scarlets rugby squad that contained a few British & Irish Lions stars, he was given little to no mercy.

END_OF_DOCUMENT_TOKEN_TO_BE_REPLACED

With rugby experience in Munster and the Ireland Sevens programme, O'Shea was fronting a new series, in conjunction with World Rugby, called 'Rugby Fit'. During the pre-season preparations for six clubs, including Newcastle Falcons, Perpignan and Edinburgh, the former Love Island winner was put through the wringer. In fairness, he got exactly what he was looking for.

On the latest House of Rugby [LISTEN from 54:15 below], O'Shea recalled going up against the likes of Leigh Halfpenny and Jonathan Davies in some tough, unforgiving wrestling face-offs. 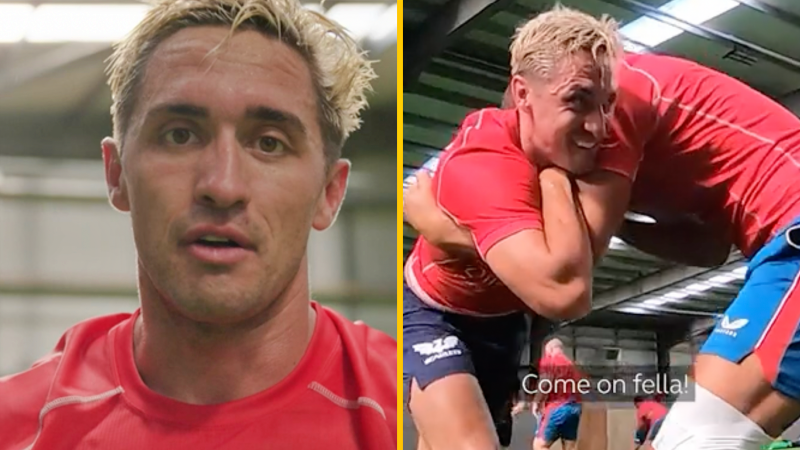 END_OF_DOCUMENT_TOKEN_TO_BE_REPLACED

Having been put through his paces at several clubs, across the UK and France, the final stop for Greg O'Shea on the Rugby Fit series, for now, was Scarlets.

The 2017 PRO12 victors are hoping to turn some heads in the United Rugby Championship and Challenge Cup. They were undertaking some gruelling pre-season sessions when O'Shea, [not so] fresh from his holidays, clocked on.

"I actually wrestled Leigh Halfpenny, over the summer," O'Shea began.

"I'd just come off the back of a two-week bender with the lads. I was in Belgium for the Tomorrowland, then I was in Mykonos for a week and a half. I then flew from Mykonos to Bristol and got a train up to where Scarlets are.

"So, I obviously wasn't in good shape, at the time. I had to wrestle Leigh Halfpenny, Jonathan Davies, who was honestly like wrestling a vending machine. It was a joke, man! Jonathan was laughing at me, any time I went to take him down. It was like giants against a kid. And I wrestled Aaron Shingler, as well. He picked me up like I was a baby!

"To see these guys up close and what they are like... these are guys whose highlights I would have watched, growing up, and here I am wrestling against them."

END_OF_DOCUMENT_TOKEN_TO_BE_REPLACED

"It was a mixed experience, then?" asked House of Rugby co-host Lindsay Peat. "You got to meet your heroes, but they demolished you."

"They kicked the crap out of me, yeah!" O'Shea responded.

The Limerick native spoke for a while with Halfpenny, during his visit, and is glad the Welsh star is back playing regularly and slotting big kicks for Scarlets.

popular
Amazon Prime Video has just added 38 very big movies to its library
The start of the superhero takeover of Hollywood is among the movies on TV tonight
Ashton Kutcher opens up about rare disease that left him unable to see or walk
Did you spot the explosive detail in the latest episode of The White Lotus?
The Pogues’ Shane MacGowan rushed to hospital
We just got the first trailer for a movie not out until 2024
'America's Unknown Child' identified solving mystery after 65 years
You may also like
2 months ago
Iconic rugby commentator Eddie Butler dies aged 65
8 months ago
Scottish Parliament official dies during rugby game in Dublin
9 months ago
Every Guinness fan needs to try these brand new experimental beers
10 months ago
"Samaritans saved my life" - Brent Pope praised for honest interview on Tommy Tiernan Show
1 year ago
Four Irish players propelled into Lions debate after England hiding
1 year ago
Craig Casey and Johnny Sexton combination backed for Italy clash
Next Page