One of the greatest ever figures in Irish sport turns 36 today and, in no particular order, we’ve come up with 36 reasons to celebrate the occasion from his remarkable career to date.

The most capped Irish player of all time.

5. The ability to withstand this knee in the head from Paul O’Connell

6. Himself and Paulie having a laugh

Leading Irish try-scorer of all time, with 17 more than his nearest challenger, Denis Hickie (Tommy Bowe is creeping up fast on 28).

11. Unbelievable piece of skill and no-look pass in training on the Lions Tour, 2013

13. Celebrating a Heineken Cup success with one of his biggest fans 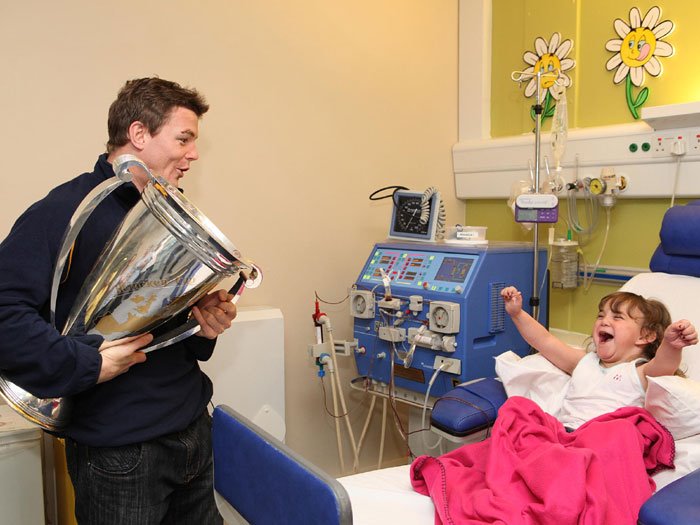 17. Knowing that tomato is a fruit, wisdom is knowing not to put it in a fruit salad

22. Dressing up as Kiss for the Leinster Christmas party in 2013

Rock 'n' the other thing!!!!! pic.twitter.com/qOavgUGa2s

31. Reaction to being dropped for the final test of the 2013 Lions Tour

"It wasn't exactly as I would have liked it scripted but you don't write your own scripts. Otherwise you'd be scoring hat-tricks every week.

"The main thing is we won the tour. One man's disappointment counts for nothing when there is a squad full of guys who are very, very happy to have won themselves a Lions series.

32. Consistently taking the piss out of Sean O'Brien

This guy is a beaut! pic.twitter.com/JYvTK28RMQ

33. RTE's tribute to arguably the best Irish sportsman of all time on the occasion of his 100th Irish cap

34. His reaction to shouts for him to give it another year

35. His classy tweet after his last ever game for Ireland in Paris

Phew! Worked out ok! Thanks for all the messages of support. Unreal feeling. Not easy taking this off for last time pic.twitter.com/Sq89BdLOnw

36. His seamless transition to the world of rugby punditry

popular
The Last Of Us Episode Five will premiere days earlier in Ireland and UK
One of the most underrated crime thrillers of recent years is among the movies on TV tonight
Amazon Prime Video has just added 21 big movies to its library
5 years ago, Hollywood took a massive gamble on a huge sequel... and lost big time
Shock as blues singer beats Adele, Beyonce and Taylor Swift to win Song of the Year Grammy
Ben Affleck's bored expression at the Grammys becomes a meme
The first reviews for Hogwarts Legacy are absolutely stellar
You may also like
2 months ago
Ronan O'Gara confirms he is on three-man shortlist for England job
3 months ago
"It was honestly like wrestling a vending machine" - Greg O'Shea on his new fitness series
4 months ago
Iconic rugby commentator Eddie Butler dies aged 65
10 months ago
Scottish Parliament official dies during rugby game in Dublin
11 months ago
Every Guinness fan needs to try these brand new experimental beers
1 year ago
"Samaritans saved my life" - Brent Pope praised for honest interview on Tommy Tiernan Show
Next Page