The past seven weeks or so have genuinely flown by. While at times it’s tough trying to balance my regular working and personal life, this was the whole point of me taking on Mixed Martial Arts as more than just a pastime to get in shape. It was to get into the mind of a fighter and put myself through what they go through as much as possible.

When I first started training in Primal with Owen Roddy I remember mentioning to friends that it was great, because I’d get in great shape (at the time thinking I wasn’t in bad shape to begin with) but it’s funny how now I don’t even care when people point out how different I look. In my last visit to The ISI with John Connor it was clear there was a dramatic shift in body shape and tone – this after six weeks.

One of my best mates, a former professional athlete, stayed with me recently while over from the UK for a few days and it was the discussion with him that made me realise I no longer cared if I had a six pack or not; it was a nice offshoot to the training, sure, but I’m more concerned with making weight on September 14th and, ultimately, winning. Maybe when this is all said and done and I’ve put on the pounds I’ll appreciate it more… but more than a whole can of cheese and onion Pringles? Probably not...

END_OF_DOCUMENT_TOKEN_TO_BE_REPLACED

I took a couple of days off work last week to show some American friends around Dublin, but managed to get to a couple of day sessions in Primal with Owen and some of his fighters, Danny, Scott and Ryan. My older brother Robbie, who is a huge influence on what I’m doing with MMA, headed out with me one of the days. A black belt in Japanese Jiu-Jitsu, he’s trained on and off for years and was delighted to get back rolling again – especially with a coach as good as Owen Roddy. Nice of him to do this to my face too.. 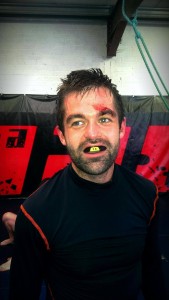 At the moment I’m just playing a waiting game, wondering who I’ll fight and how it’ll go… over and over in my head. One of my favourite ever athletes, UFC Light Heavyweight/Middleweight Chael Sonnen, is someone I’ve constantly looked to in terms of motivation.

END_OF_DOCUMENT_TOKEN_TO_BE_REPLACED

For the first time I feel like what Owen is telling me isn’t just going into my brain and pottering around before getting lost; it’s actually making its way to my limbs somehow. I’ve a long way to go, and I do not doubt that for a second. Every day in training I’m humbled, educated and pushed hard.

As ever, thanks to Owen for his amazing coaching, words of wisdom and generally being a legend. Go wish him a happy birthday on Twitter! Thanks to Bodyfirst for keeping me in supplements and to the guys at SBG city centre for letting me use their digs to train.

Finally, If you wanna buy tickets to the event I'm fighting in there will be a great card of professional fights on afterwards too.

popular
Simon Cowell concerns fans with appearance as they 'don't recognise him'
Here's the line-up for this week's episode of The Late Late Show
Woman left confused after DNA test shows child isn't husband's despite her claims that she never cheated
One of the best movies of the decade has just been added to Netflix
Jonah Hill files petition to legally change his name
Starbucks worker breaks down in tears after they're scheduled to work 8 hours
Katherine Ryan says famous TV star is a ‘predator’ and everyone in industry knows
You may also like
4 weeks ago
Conor McGregor slammed for Halloween photo of mum in 'black face'
2 years ago
Paddy Holohan has been suspended from Sinn Féin over his claims that "scum" underage girls were having sex with men and blackmailing them
3 years ago
Straight Blast Gym Ireland to open new location in Dublin this month
3 years ago
WATCH: Irish MMA fighter shares lovely video of him and his grandad singing 'Imagine' together
4 years ago
WATCH: Conor McGregor is beaten by Khabib Nurmagomedov as all hell breaks loose at the end of the fight
4 years ago
WATCH: The Irish have taken over Las Vegas ahead of the McGregor fight
Next Page