WATCH: Joe Schmidt reveals Christy Moore visited the Irish team on Monday and performed for them

It's been a patriotic week for Ireland.

Never mind that we've just beaten England in their back garden or that it's the international celebration of our patron saint – revel in the fact that none other than Irish musical legend Christy Moore visited the Irish team just days before their Grand Slam-depending performance to perform for them and wish them well. 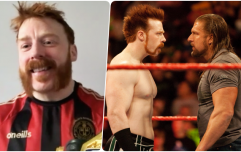 END_OF_DOCUMENT_TOKEN_TO_BE_REPLACED

Ireland head coach Joe Schmidt, speaking like a proud dad, revealed in an interview post-match that the singer-songwriter met with the team on Monday and performed his hit song Ordinary Man for the players.

Schmidt said the moment resonated with him as he believed that the Irish team are simply "ordinary men who are an extraordinary team."

"We had Christy Moore in on Monday, and he was fantastic," Schmidt revealed in the interview.

"He sang 'Ordinary Man' at one stage, and they (the players) are ordinary men who are an extraordinary team, who've delivered exceptional deeds."

The New Zealand-native was full of praise for his players after his team sealed Ireland's third ever Grand Slam with a 24-15 win over England at Twickenham.

"I thought we showed a fantastic mix of class, and we opened them up a few times with some really clever stuff, that they executed so well," he reflected after the match.

"We had to withstand some immense English pressure – a desperate team looking to get the result. I don't know what the tackle stats were, but we had to work incredibly hard."

The head coach came across particularly pleased with his team's younger players, saying today that the Grand Slam win is a fantastic moment for the squad's senior players.

When prompted about Johnny Sexton's sensational drop-kick in Paris just a few weekends ago on the opening day, Schmidt joked that Sexton just wanted to do it differently to Ronan O'Gara back in 2009.

"He just didn't want to do it the same way as ROG," he said.

"They are very much the 'yin and yang', both absolute class people, and kickers, and players.

"ROG wanted to finish with one, Johnny thought he'd start with one.

"They both got what they wanted."

The Big Reviewski || JOE · Mortal Kombat director Simon McQuoid and new Sub-Zero star Joe Taslim on fatalities and fight scenes
popular
The JOE Movie Quiz: Week 101
RSA confirm online theory tests to come into effect later this month
QUIZ: Can you identify the EU country of origin from these €1 coins?
The 50 most iconic songs of all time* have been revealed
Here are the restrictions being eased today as Ireland continues reopening
QUIZ: Can you list the 32 counties of Ireland in order of population size from largest to smallest?
The JOE Friday Pub Quiz: Week 242
You may also like
4 months ago
Irish band's Christmas song picked out by Grammy-winning Adele producer
6 months ago
JOE’s Song Of The Day #869 – Pádraig Bennett 'The Two of Us'
8 months ago
Missing gigs and music in general? Have no fear, we're hosting a private video premiere party with Wild Youth
8 months ago
Kylie Minogue, Gary Barlow and The Coronas on the bill as lineup for Concert4Cancer revealed
8 months ago
New Dermot Kennedy music video shows a locked down Dublin "at a standstill"
1 year ago
Irish band looking for public to star in brand new music video
Next Page