The Ulster hooker is widely expected to be named in the British & Irish Lions squad on Wednesday and Schmidt has already prepared for the next three Tests without him.

Ireland will play one Test against the United States in New Jersey before they embark on a two-game spin to Japan.

With at least eight senior Irish players on Lions duty and the likes of Tommy Bowe, Jordi Murphy and Ultan Dillane all injured, Schmidt's team will look a lot different from the one that finished the Six Nations with a win over England. 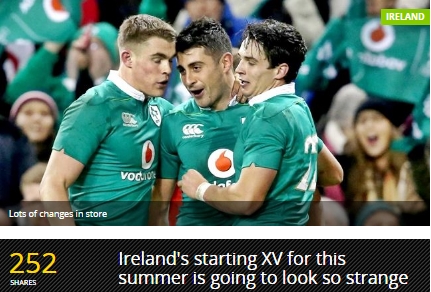 END_OF_DOCUMENT_TOKEN_TO_BE_REPLACED

SportsJOE understands that Schmidt has identified Munster captain Peter O'Mahony to take over the captaincy duties during the summer tour.

O'Mahony has captained Ireland before, on a summer tour to North America, in 2013, and in the home win over Canada last November. He was a leading candidate to succeed Paul O'Connell as Ireland captain after the 2015 World Cup but both men sustained serious injuries in the pool stage win over France.

The only issue here is that O'Mahony's superb form over the past six weeks - for Munster and Ireland - has shoved him right into Lions contention.

Ronan O'Gara told The Hard Yards that he would select O'Mahony on the bench for his Lions XV and many former players and rugby pundits feel certain he will travel to New Zealand.

END_OF_DOCUMENT_TOKEN_TO_BE_REPLACED

Earlier this week, O'Mahony told The Irish Independent that making the Lions tour would be a dream come true but he was not getting carried away. He commented: "I would certainly be a long shot, but all I can do is keep the head down, play as well as I can for the next few weeks. And if not, hopefully I will be lucky enough to go on a really interesting tour of the USA and Japan with Ireland."

O'Mahony was spotted as a potential Munster captain from as early as 17 as he made a mark through the province's age grades. He captained Munster's senior side for the first time at the age of 21, against Newport Gwent Dragons, and took over the job on a permanent basis two years later.

O'Mahony is by no means guaranteed a spot in the Lions squad and may be first reserve for the back row department. Were he to make Gatland's squad, however, Schmidt may be able to call on experienced heads such as Jamie Heaslip, Donnacha Ryan or Andrew Trimble.

popular
Met Éireann issues Status Yellow thunderstorm warning for 12 counties and 2 provinces
Meet the Irish man who’s selling all of his stuff and going to live in a tiny house on wheels
The JOE Movie Quiz: Week 102
QUIZ: Is your General Knowledge up to scratch?
The JOE Music Quiz: Week 57
QUIZ: How many of these characters from The Simpsons can you name?
The JOE Friday Pub Quiz: Week 243
You may also like
3 days ago
"Full scrutiny" to be given to proposal to extend Gardaí emergency powers in June
3 days ago
Four out of 148 Irish bathing waters identified as "poor"
3 days ago
Assassin's Creed director on why Ireland is the perfect setting for their new game
4 days ago
Penneys issues statement after shoppers try to sell appointments for €100
5 days ago
Tánaiste Leo Varadkar "confident" indoor dining may be able to return from July
5 days ago
No new deaths related to Covid-19 reported in Ireland, 381 new cases
Next Page