Liverpool go seeking revenge in Madrid, Theo Walcott continues his comeback against Anderlecht and Group A is wide open...

As if Liverpool's task wasn't tough enough already, they now have to face a Real side containing Welsh wonder kid Gareth Bale. The former Spurs man is fit to play and Carlo Ancelotti has made it clear the 25-year-old will be involved in tonight's crucial tie.

END_OF_DOCUMENT_TOKEN_TO_BE_REPLACED

Real cruised to a 3-0 win in the reverse fixture a fortnight ago and it's hard to see the outcome being any different tonight.

Did we forget to mention Cristiano Ronaldo is one goal away from being the Champions League's all-time top goal scorer?  It could be a long evening for Liverpool.

Arsenal can guarantee their passage through to the next stage if they win and other results go their way in Group D tonight. Arsene Wenger must be fairly satisfied with this considering his side have not been firing on all cylinders this season.

Theo Walcott returned for Arsenal at the weekend and should get some game time tonight. The England international will be expected to share the goalscoring burden with Alexis Sanchez, who has now scored 10 goals in his last 12 games.

It is difficult to see anything but a win for Arsenal. If they gain three points and Galatasaray lose to Group D leaders Borussia Dortmund, the Gunners will qualify for the last 16 with two games still to go, not a bad achievement at all.

Group A heats up

Very few people would have predicted that Olympiakos would be Group A leaders three games in. But their opening day win against last year's runners-up Atletico Madrid and a hard-fought victory over European heavyweights Juventus has left them in pole position. 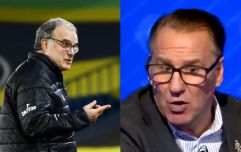 END_OF_DOCUMENT_TOKEN_TO_BE_REPLACED

The only blot on the Greeks' report card is a 2-0 defeat against group minnows Malmo.

With only three points separating top to bottom, this group looks wide open and should provide excellent entertainment in tonight's fixtures. Juventus host Olympiakos and Atletico are travelling to Malmo.

The Big Reviewski || JOE · TBR Spotlight: Loki Episode One - 'Glorious Purpose'
popular
QUIZ: Can you name all of these counties from their nicknames?
The JOE Movie Quiz: Week 106
Cyclist in critical condition following hit and run collision in Dublin
Pharmacies to begin administering Covid-19 vaccines from today
Matt LeBlanc has seen the memes of him as every Irish auld lad and very much enjoyed them
QUIZ: Take on this tasty challenge of your General Knowledge skills
The JOE Music Quiz: Week 61
You may also like
23 hours ago
Christian Eriksen stable but may not play football again, says sport cardiologist
2 months ago
Martin Compston reveals moment he delayed Line of Duty filming to watch Scotland penalty shoot-out
3 months ago
EA Sports bans Irish FIFA player who racially abused Ian Wright for life
3 months ago
TOWIE star Mark Wright is officially the worst player on FIFA 21
4 months ago
Jamie Carragher reacts to hilarious TikTok remix combining on-air yelp with John Legend song
4 months ago
Roy Keane reacts to the dancing Keano FIFA TikTok meme
Next Page