Imagine being Jurgen Klopp's mate - what a thing it would be. He'd make a joke, laugh hysterically, ask you if he got the punchline right, and then laugh hysterically again. The gegen-lols would be off the charts. And best of all, you'd be on the receiving end of more than your fair share of those famous Klopp hugs.

It has been a defining aspect the German's first year as Liverpool manager; many credit fluid tactics, canny buys and a ceaseless work ethic for the club's rapid development in the last 12 months, but the effect of Klopp's warm embraces cannot be discounted. Not since Doug's famous butt-slaps in Friends has a boss so effectively cajoled his employees.

END_OF_DOCUMENT_TOKEN_TO_BE_REPLACED

But we know what you're thinking - why has no one analysed each hug in great detail to ascertain their untold power and immeasurable influence? What does each type of Klopp-Klinch actually mean? Well, worry not, because you didn't ask but we listened. So here's a breakdown of Jurgen's various cuddles...

Here Klopp pushes the mercurial Philippe Coutinho's face deep into his armpit, so that he may breathe in his pungent scent and fully appreciate the sweat and effort demanded of him as a Liverpool player. The German is subliminally telling his Brazilian playmaker: 'Look, I know you've got all the skills in the world, but they are worthless without perspiration...' 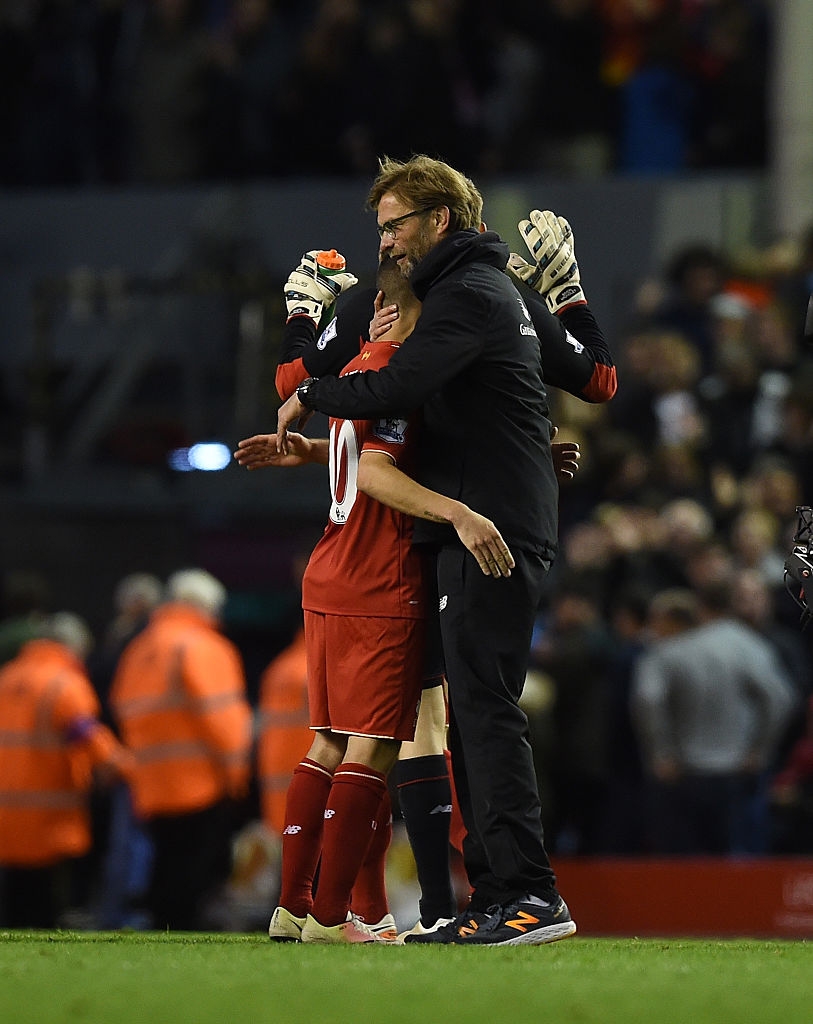 END_OF_DOCUMENT_TOKEN_TO_BE_REPLACED

This is classic Klopp. Cameron Brannagan may be a highly-rated attacking midfielder with a veneer of cock-sure confidence, but his Teutonic father-figure can sense a deep-rooted vulnerability in the novice 20-year-old. He cradles the youngster's head whilst warding off potential aggressors with a primal roar. It's exactly what Brannagan needs at this stage in his development. 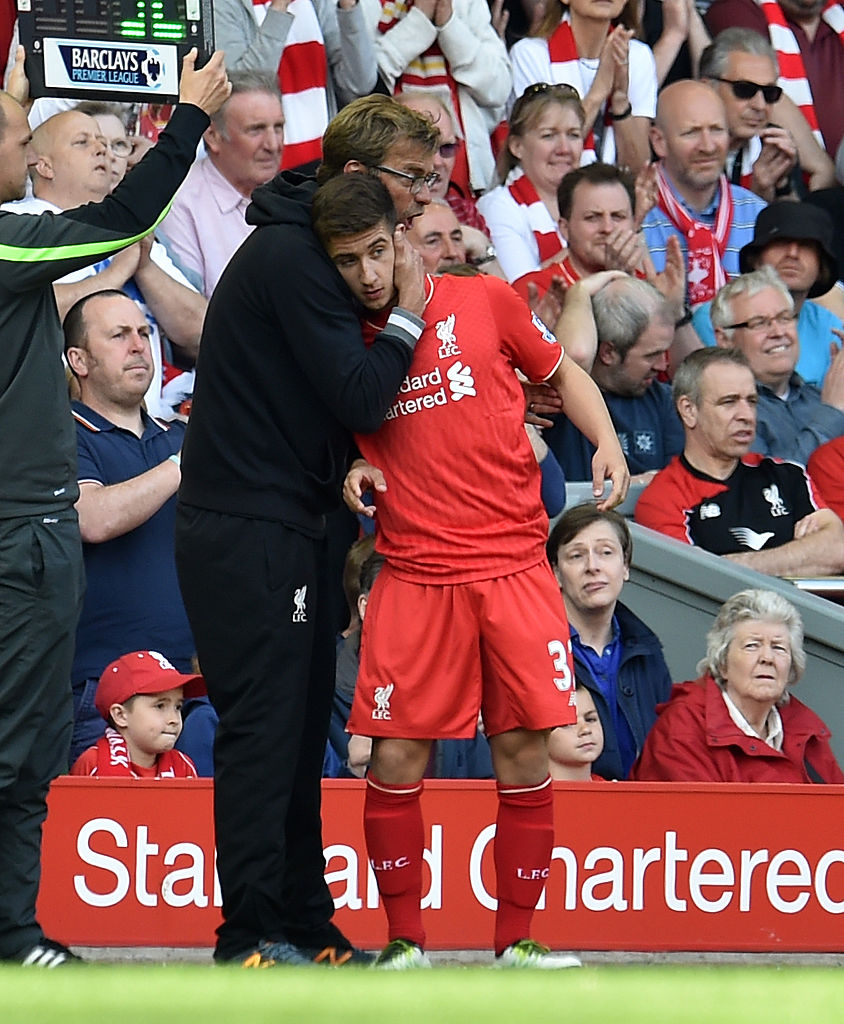 END_OF_DOCUMENT_TOKEN_TO_BE_REPLACED

Opting for the parallel side-embrace, Klopp gifts Emre Can his own tailor-made clinch, and as such perfectly demonstrates the adaptability of his caresses. Fully aware that his preening midfield enforcer requires a level of outside validation, the tactile tactician uses animalistic grooming techniques that he's clearly borrowed from our primate cousins. 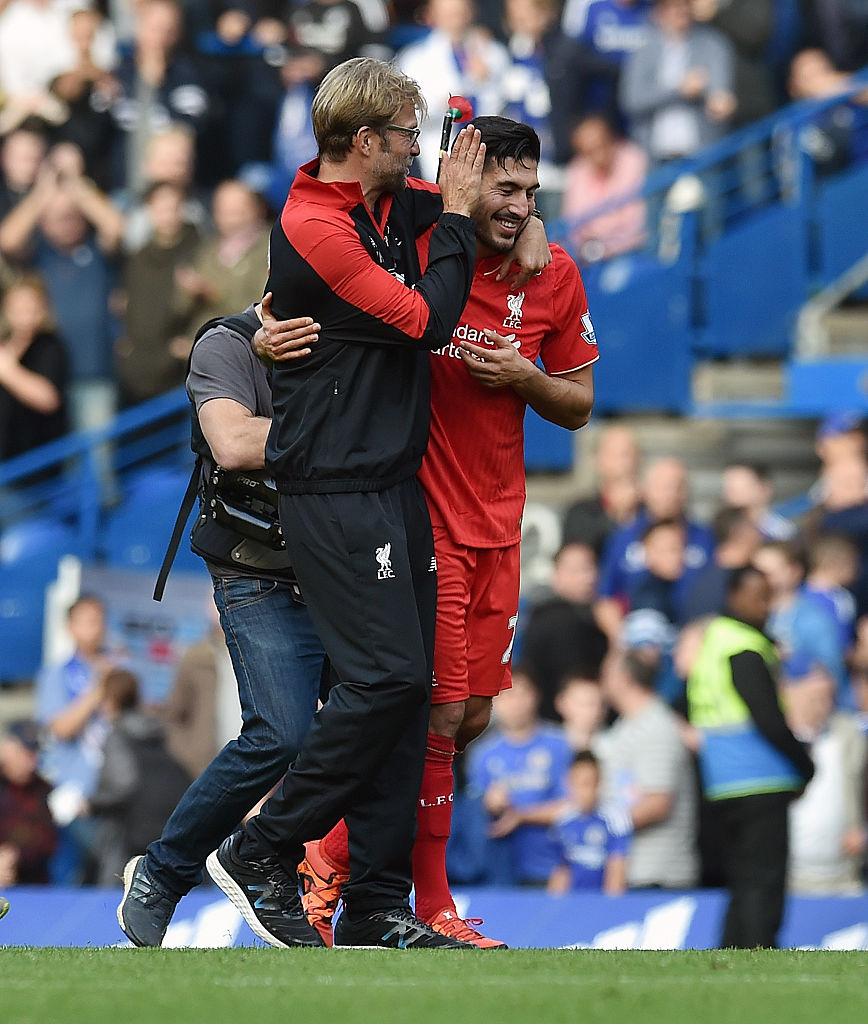 The Hiding To Nothing (James Milner)

Even Klopp can't work miracles. He goes into this embrace with James Milner with the best of intensions, but alas gets absolutely nothing back from his utility man to work with. The old saying 'It takes two to tango' was never truer, and poor Jurgen looks positively bored by the whole sorry affair. A hug only really works if you truly believe in it. 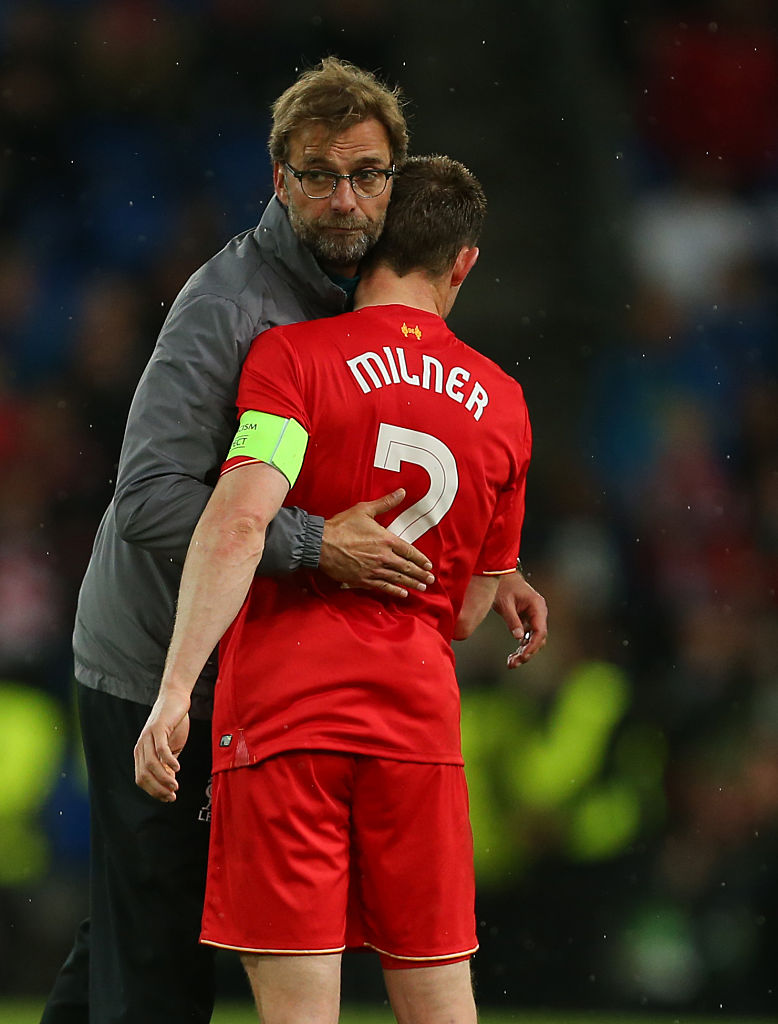 A great number of people - including Liverpool fans - have been surprised by the impact that Sadio Mane has made at Anfield since joining from Southampton. They shouldn't be. Klopp has a track record of improving players and this is just one reason why. He is holding Mane close to his bosom, as if to say: 'Suckle hard upon my frothy teet and imbibe my teachings...' 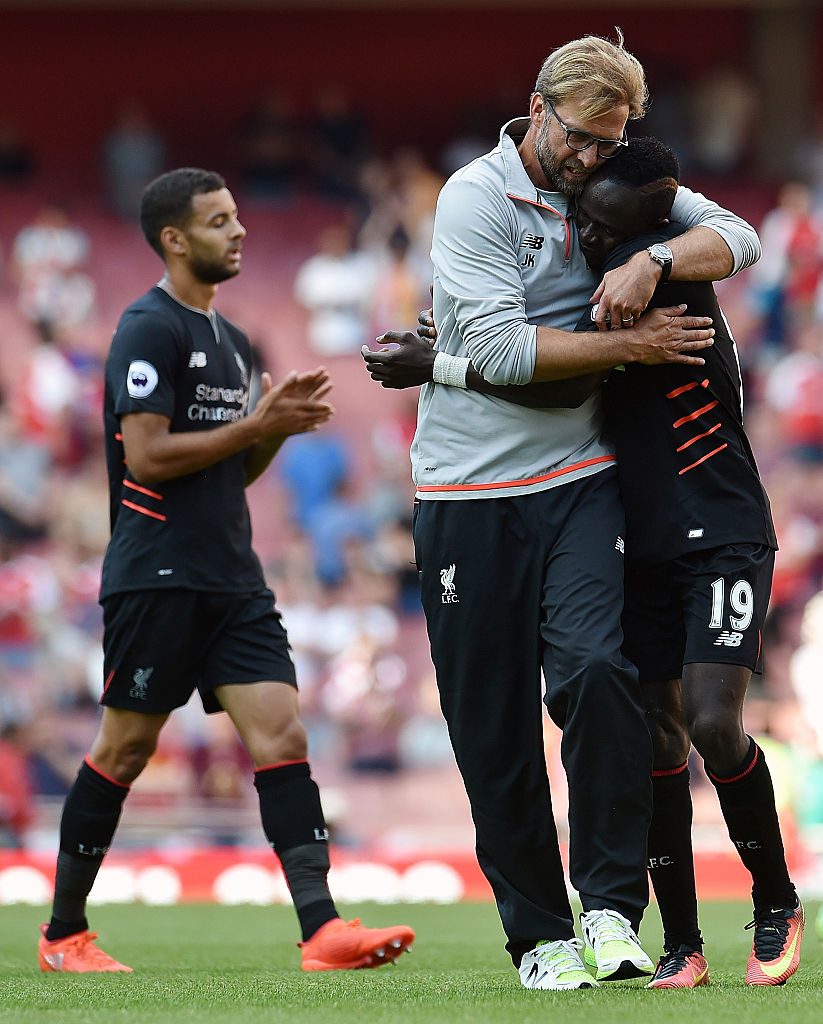 This is pure mind games from Klopp, and why he is hailed as one of the world's most accomplished man-managers. It may look like the 'boss' boss is doing nothing here, but quite the contrary - he's putting the complete onus on his captain to take charge and command the squeeze. A grateful Henderson is visibly appreciative of the authority he has been granted. 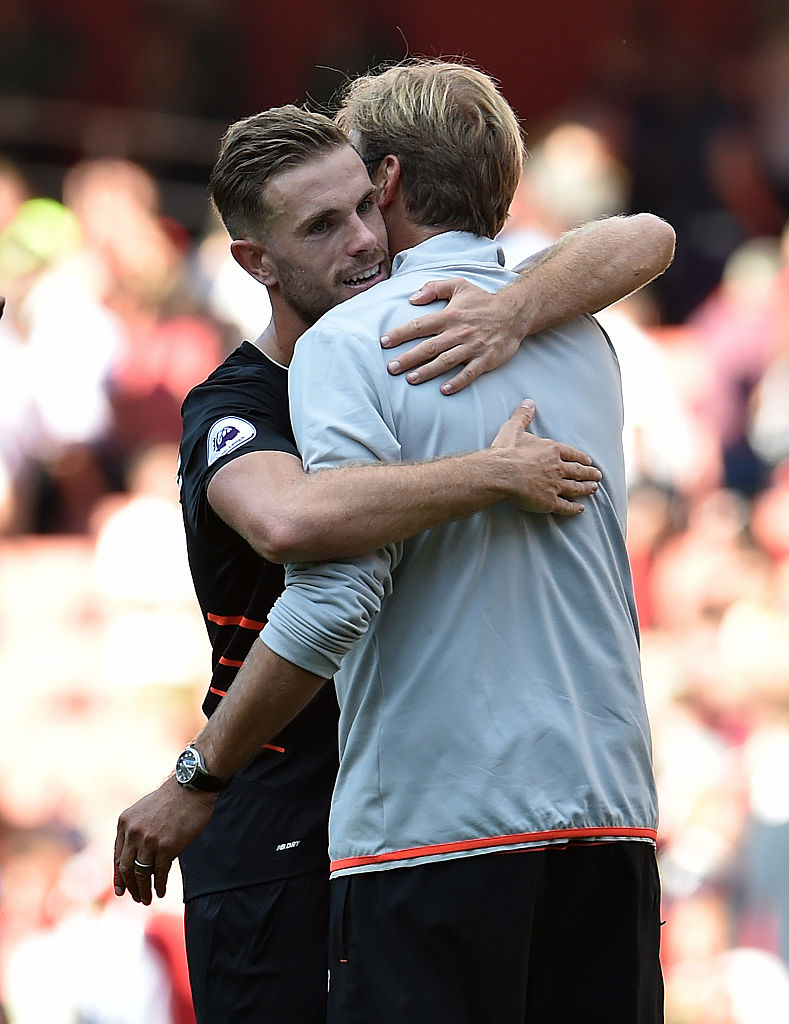 This is the other side to Klopp. It's horses for the courses - some players require the stick, others the carrot. Here the German is gifting local simpleton Alberto Moreno a pity-hug, and the adorable Iberian imp couldn't be happier - just look at his face! Is Moreno worthy of Klopp's enveloping arms? Certainly not. Does he get a hug? Of course he does. Lovely stuff.

popular
5 years ago, Hollywood took a massive gamble on a huge sequel... and lost big time
QUIZ: We bet you can't get full marks in this extremely frustrating geography quiz
Nicola Bulley's phone found by the river 'could be a decoy', diving expert suggests
Woman dies from hypothermia after telling doctor she 'couldn't afford heating'
One of the best crime thrillers ever is among the movies on TV tonight
Amazon Prime Video has just added 21 big movies to its library
An incredibly fun action blockbuster is among the movies on TV tonight
You may also like
2 months ago
Will Ferrell is looking for someone to put him and his mum up in Liverpool
5 months ago
Nine-year-old girl shot dead in Liverpool
8 months ago
Merseyside police defend ‘exemplary’ Liverpool fans tear gassed by French police
1 year ago
Police issue warning over CCTV footage of Liverpool bomb explosion
1 year ago
Liverpool bomb declared a terrorist attack as police confirm fourth arrest
1 year ago
Liverpool bomb: Taxi driver "locked bomber inside car" after spotting explosives (Report)
Next Page