It's the end of an era for Ireland and John O'Shea.

This evening, John O'Shea will line-out for Ireland for the 117th and final time, bringing to the end a fantastic Ireland career.

Football fan and President of Ireland Michael D. Higgins has written a typically classy tribute letter to honour the Waterford man ahead of his final appearance. 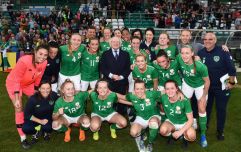 Michael D. Higgins celebrating with the Ireland women's team after 4-0 win will warm the cockles of your heart

END_OF_DOCUMENT_TOKEN_TO_BE_REPLACED

“John O’Shea has been a tremendous representative for Ireland, over the 22 years that he has played for Ireland, 17 of which were at senior level.

"Since winning the UEFA U16 European Championships in 1998, and his debut in the senior team in 2001, John O’Shea has been one of the most inspirational, committed and admired members of our national teams.

"Only a handful of players have been chosen to represent Ireland on more than 100 occasions, and with 117 caps John is in extremely good company on that list of greats.

"On behalf of all Irish football fans, I want to thank John for all he has given to Irish football, and I wish him continuing success, not only in his footballing life, but also in his future endeavours.

"I wish both him and Yvonne, and their children Alfie and Ruby continued happiness and good health."

Higgins has also confirmed that he will be in attendance at Dublin's Aviva Stadium tonight as Ireland take on the USA.

The Big Reviewski || JOE · TBR Spotlight: Loki - Episode Six - 'For All Time. Always.'
popular
It’s official, Irish people have one of the best chances of surviving an apocalypse
Dublin cinema named best cinema in all of UK and Ireland
Met Éireann issues weather warning for three counties ahead of arrival of Storm Evert
Gardaí investigating assault allegations after incident in Temple Bar
Michael D Higgins raises concern over having to consider high volumes of legislation in short time frames
People think they've figured out the ranking of the viewers on your Instagram Stories
The 50 most iconic songs of all time* have been revealed
You may also like
3 days ago
Gardaí examining social media threats against President Michael D Higgins
1 week ago
President Michael D Higgins signs indoor dining legislation into law
1 month ago
President Higgins praises 17-year-old "hero" who saved mother and daughter from drowning
1 month ago
President Higgins welcomes two ponies to live at Áras an Uachtaráin
2 months ago
This bird looks a little bit like Michael D Higgins, and he agrees
2 months ago
Michael D. Higgins' dog goes viral after trying to get some attention during a TV interview
Next Page