If that’s not enough to draw you in, surely the presence of Marty Morrissey will.

There are certain stories that practically every GAA club in the country can relate to.

Having to play a long-retired veteran or a straggler from a pub in a Junior B game would be one, for example.

END_OF_DOCUMENT_TOKEN_TO_BE_REPLACED

In Tradition, a movie by OC Productions, a judge in a small town finds himself presiding over the most controversial case his court and the town has ever seen – a controversial refereeing decision made during a club championship game.

Directed by Damian O Callaghan, it was shot entirely in Killarney and features plenty of familiar faces from the world of GAA and entertainment in Ireland, including Marty Morrissey, Pascal Scott from the Young Offenders and comedian Brendan Grace.

It even has its own jersey, courtesy of O’Neills, with two Gardaí on the front. 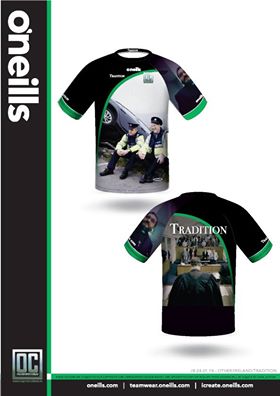 Tradition doesn’t have an official release date yet, but it will be coming sometime in 2018 and there’s enough in the trailer to whet the appetite… and we’re not just talking about Marty either.