Pic: A picture that sums up the passion between New Zealand and South Africa

New Zealand versus South Africa is always a keenly contested affair and the match at Eden Park this morning was no different, with passions running high.

The All Blacks took a 17 – 10 half-time lead with tries courtesy of Kieran Read and Brodie Retallick, while Bismarck du Plessis had a very eventful first 40 minutes.

The South African hooker was harshly sin-binned for a crunching tackle on Dan Carter (see main image) that forced the out-half off with a suspected broken collarbone, and bundled over for a try on his return with the Springbok scrum looking impressive. And the action did not stop there as he was sent off early in the second half for a second yellow by Romain Poite, who probably won't be holidaying in South Africa any time soon, before captain Read added a second try to his name.

Of course there is plenty of history and rivalry between the two, with things getting a little heated after the Carter incident. 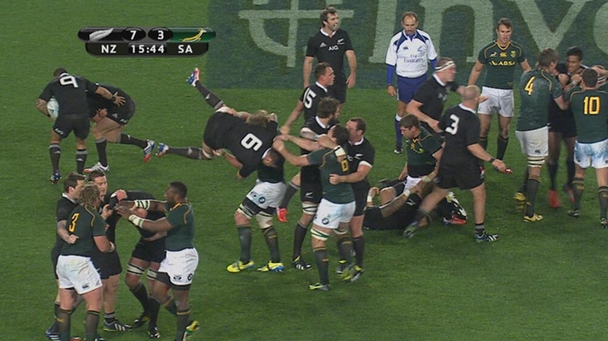 A picture paints a thousand words and all that.

The crowd in Auckland are getting good value for their money.

popular
Man arrested following discovery of a body in apartment in Dublin
Family of Ashling Murphy share heartbreaking tribute at Fleadh Cheoil
QUIZ: Can you score 12/15 in this difficult General Knowledge Quiz?
Weather advisory issued as temperatures in Ireland set to soar again
The JOE Movie Quiz: Week 166
One of the best Irish films of recent years is among the movies on TV tonight
QUIZ: Test your skills to the limit with this General Knowledge Quiz
You may also like
4 months ago
Scottish Parliament official dies during rugby game in Dublin
5 months ago
Every Guinness fan needs to try these brand new experimental beers
6 months ago
"Samaritans saved my life" - Brent Pope praised for honest interview on Tommy Tiernan Show
1 year ago
Four Irish players propelled into Lions debate after England hiding
1 year ago
Craig Casey and Johnny Sexton combination backed for Italy clash
1 year ago
Defence grows for Billy Burns after one of the roughest days of his rugby career
Next Page