We bet he’s wishing he wagered more than 80 cents now.

Given that the odds on them coming in are fairly high, the majority of punters who do multi-game football accumulators never wager too much money on them; on the off-chance that they do come in, the reward will be significant enough in any case.

JOE reader Patrick McPartlan must have emptied out all the coppers in his change jar before taking a punt on a ten-match football accumulator with Ladbrokes last night, staking the grand total of 80 cents on a combination of matches from the Premier League, the Coppa Italia, League One and the Conference. 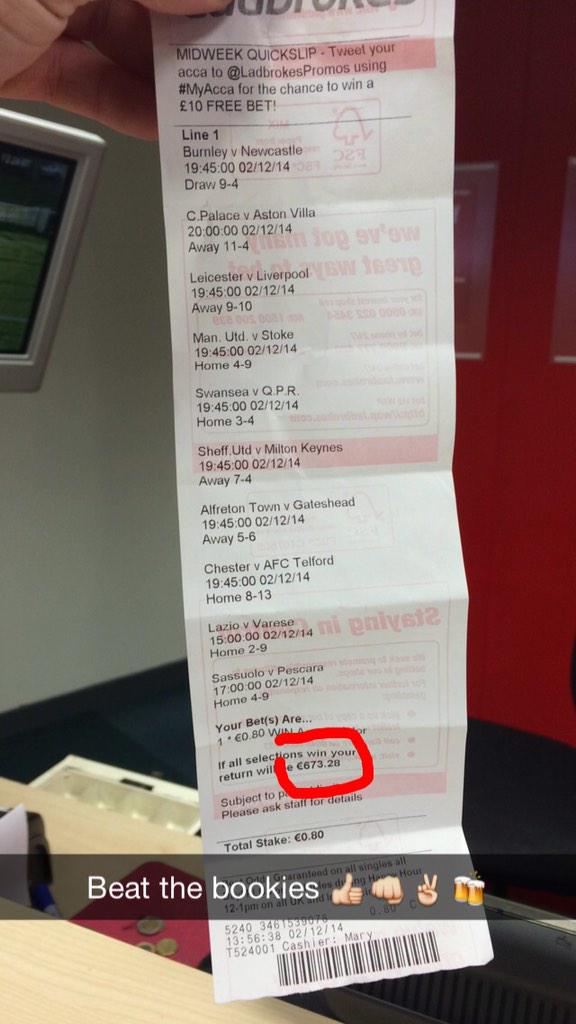 All in all, Patrick’s bet came in at odds of just over 840/1 and though he’s no doubt wishing he had thrown an extra few euro towards a pretty ambitious bet, it’s no harm having an extra €700 in the back pocket coming up to Christmas.

popular
The JOE Movie Quiz: Week 166
QUIZ: Test your skills to the limit with this General Knowledge Quiz
The JOE Friday Pub Quiz: Week 306
Family of Ashling Murphy share heartbreaking tribute at Fleadh Cheoil
QUIZ: Can you score 12/15 in this difficult General Knowledge Quiz?
One of the best Irish films of recent years is among the movies on TV tonight
Man in his mid-20s dies in two vehicle collision in Cork
You may also like
2 days ago
The JOE Friday Pub Quiz: Week 306
5 days ago
Rebekah Vardy breaks down in tears in first TV interview since Wagatha Christie defeat
1 month ago
Gary Lineker says he suffered racist abuse during football days due to "darkish skin"
2 months ago
Merseyside police defend ‘exemplary’ Liverpool fans tear gassed by French police
2 months ago
BBC trainee accidentally posts message mocking Man United live on TV
2 months ago
Kurt Zouma charged with three animal welfare offences
Next Page