The All-Britain champions of 1982 and 1999 have pulled off a publicity coup if nothing else with the announcement that they have signed the former Hull City striker. Coming from the mean streets of Yorkshire, it's unclear how good Windass will be at our fine game. He said ''I have never played Gaelic football before but hopefully I can pick up the skills soon and hit the onion bag as many times as I have done with previous clubs."

Dean is pictured in the middle below with Thomas Duffy from the Hugh O'Neill's club on the left. 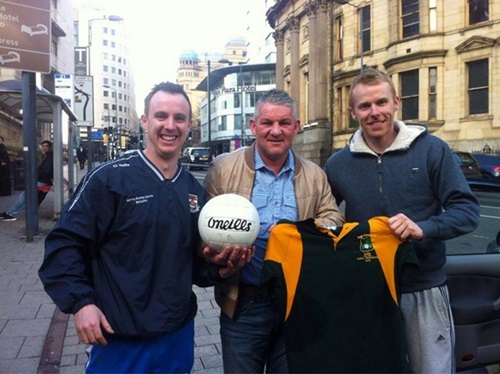 END_OF_DOCUMENT_TOKEN_TO_BE_REPLACED

He's played in the Premier League with clubs such as Bradford City and his home town club Hull City. He's always been one of the big characters of the game and has a cult like status with Hull. He'll always be adored in Hull for this goal in particular. It was the play-off final at Wembley between Hull City and Bristol City and this volley ensured Hull would be promoted to the top-tier of English football for the first time in their 104 year history. It was a cracker.

He's dabbled as a football reporter for Sky too. This is a lovely clip of him reporting from a match when someone scores and he is a bit unsure when pressed by the legendary Jeff Stelling.

He certainly has the physique to be an effective full-forward and he knows where the back of the net is, but we're not sure if we'll see Mr Windass in Croke Park any time soon.