JOE would wager that the two most popular names of this summer have been Luis Suarez and Garth Brooks, just not with Giorgio Chiellini and the Croke Park residents obviously.

Their names have been mentioned so much that JOE can spell them both backwards, Htrag Skoorb and Siul Zeraus, in case you were wondering.

It seems though that this fan of the Liverpool striker wasn't reading us, or anyone else, over the last few weeks. If only they had spell check on tattoos. Take a look. 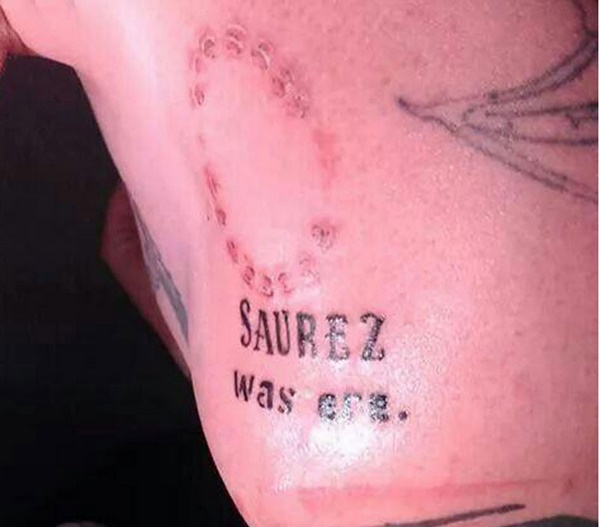 JOE wonders about two things here; why would anyone choose to get a tattoo of a moment involving a player they (presumably) dislike? And what part of the body is that?

popular
Woman left confused after DNA test shows child isn't husband's despite her claims that she never cheated
One of the best movies of the decade has just been added to Netflix
Jonah Hill files petition to legally change his name
Starbucks worker breaks down in tears after they're scheduled to work 8 hours
Here's the line-up for this week's episode of The Late Late Show
Cristiano Ronaldo 'agrees £173m-a-year deal' with Saudi club
Katherine Ryan says famous TV star is a ‘predator’ and everyone in industry knows
You may also like
5 days ago
World Cup 2022 Day Six: All the major action and talking points
5 days ago
Japan fans explain why they clean up after World Cup matches
6 days ago
The JOE Friday Pub Quiz: Week 322
1 week ago
Japan supporters clean up rubbish following famous win over Germany
1 week ago
ITV football pundit Nadia Nadim heartbroken as mother killed by a truck
1 week ago
Non-league side make approach for 37-year-old free agent after World Cup
Next Page