Does Arsene Wenger know that Giroud is playing up front for Sheffield United tonight?

We here in JOE have been guilty of   mistakes in the past and our sympathies extend to anyone in the media who has the misfortune to experience them.

This graphic in the Irish Independent this morning, showing the proposed line-ups for tonight's Capital One Cup semi-final first leg match between Spurs and Sheffield United, is hilariously baffling.

END_OF_DOCUMENT_TOKEN_TO_BE_REPLACED

We're not sure what's going on here, but it appears that the Stoke goalkeeper Asmir Begovic is in goal for Sheffield United, as well as playing up front for Spurs.

There are loads of others too, such as Sheffield United's defence and a midfield being made up of... eh... Cole, Ferdinand, Luiz and Ivanovic. 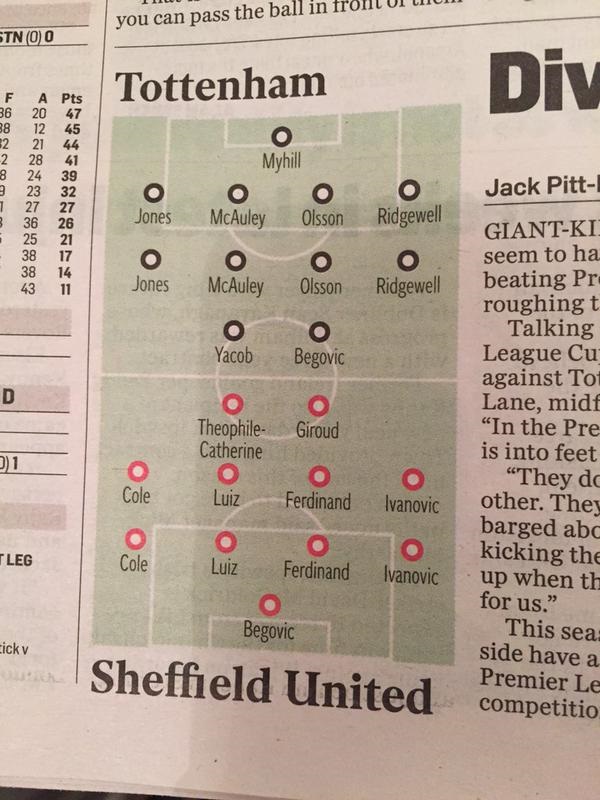 Thanks to Craig Reilly for sending this into us.

popular
Body of a man discovered in the water off the coast of Donegal
QUIZ: How well do you really know Irish weather?
QUIZ: You'll do well to get 100% in this General Knowledge Quiz
The new Garda uniform has finally hit the streets
25 years ago, Sylvester Stallone delivered his best performance in a hard-hitting crime drama
A first look at one of this year's major award-winning movies has been released
A scary real-life disaster epic is among the movies on TV tonight
You may also like
1 week ago
The JOE Friday Pub Quiz: Week 306
1 week ago
Rebekah Vardy breaks down in tears in first TV interview since Wagatha Christie defeat
1 month ago
Gary Lineker says he suffered racist abuse during football days due to "darkish skin"
2 months ago
Merseyside police defend ‘exemplary’ Liverpool fans tear gassed by French police
2 months ago
BBC trainee accidentally posts message mocking Man United live on TV
2 months ago
Kurt Zouma charged with three animal welfare offences
Next Page