PIC: Nothing says Laois Junior C football quite like a physio having to go in goals

The very definition of a team player is someone that's willing to sacrifice the chance to play in their favourite position to help the team out and we've a new contender for Ireland's most versatile GAA player.

Graham Geraghty can step aside because this physio for Laois side Ballyroan Abbey is clearly GAA's most talented utility man.

END_OF_DOCUMENT_TOKEN_TO_BE_REPLACED

In the recent match between O'Dempseys and Ballyroan Abbey, Ballyroan found themselves a man short so they asked the physio to put down the magic sponge and throw on a jersey.

After the teams corner-forward discovered that there was only a few minutes left in the first-half, he decided to head off early because "there wasn't any point in playing on". Being a man down, the physio stepped in to fill the vacant place and it was an inspired move because the game finished Ballyroan Abbey  5-11 O'Dempsey's 0-7. 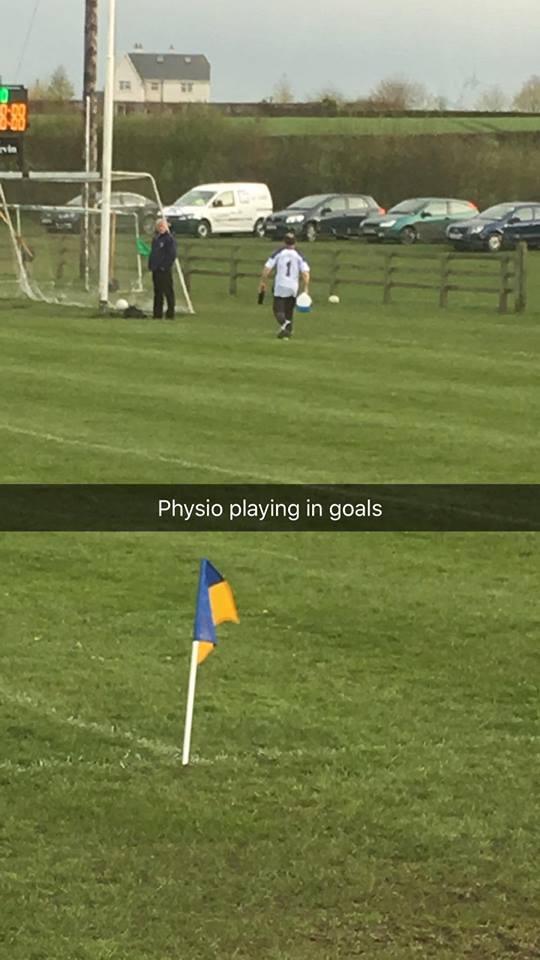 popular
Amazon Prime Video has just quietly added 15 big movies to its library
QUIZ: Can you guess the pixelated album cover?
An unforgettable sci-fi film is among the movies on TV tonight
Gardaí issue update on investigation into murder of Sophie Toscan du Plantier
Travis Barker rushed to hospital after tweeting "God save me"
Calls for €20 social welfare increase and minimum wage of €13 in new Budget
007 producers provide new update on Bond 26
You may also like
2 days ago
Taoiseach condemns "disturbing" fight at Galway v Armagh game
1 month ago
The 2 Johnnies share unbelievable catfish ordeal affecting over 40 people
1 month ago
Limerick hurler arrested following alleged altercation with Tipperary player in Limerick pub
2 months ago
Woman in her 20s dies after accident during Camogie match
8 months ago
Wicklow GAA to investigate fight after Under 15 match on Saturday
1 year ago
Post-match celebrations and a lack of social distancing at certain events put club game on hold
Next Page