Pic: So Abou Diaby isn't the most injured player at Arsenal, who is it then?

There must be a revolving door to the physio room at Arsenal...

You may remember a few weeks ago we brought you this infographic that showed a detailed list of all the injuries that Arsene Wenger has seen his players suffer during his time at the club.

Of course Wenger is the longest serving manager in the Premier League so this information is all relative but this latest info, gathered by French newspaper L'Equipe, on the amount of injuries that Arsenal players have suffered during his tenure is very interesting.

END_OF_DOCUMENT_TOKEN_TO_BE_REPLACED

Using data from physioroom.com, L’Equipe have found that Theo Walcott is Arsenal’s most commonly injured player. We think Abou Diaby would jump for joy with this news but he would probably fall and break his leg knowing his luck.

We were shocked to learn that Walcott it still only 25 and has picked up 42 injuries during his eight-year stay at the club.

Arsenal resume their Champions League campaign this week away to Anderlecht and guess what, they face an injury crisis.

Take a look at the injury history of their players. 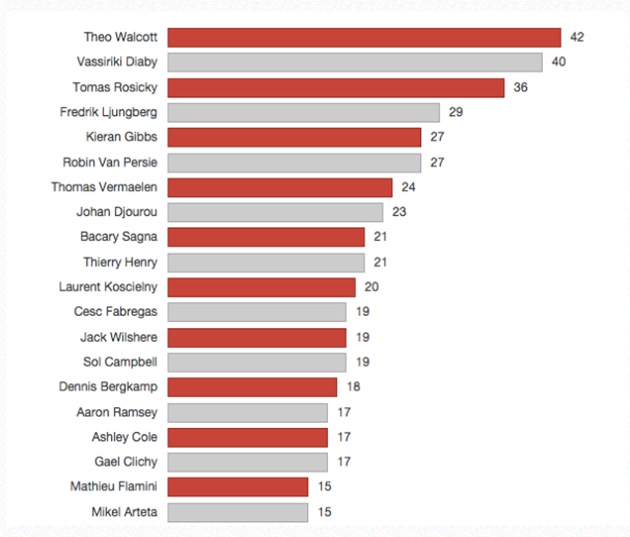 
The Architects Of Business || JOE · "It doesn't get bigger than this for me" - Irish scientist wins EY Entrepreneur of the Year 2020
popular
Donald Trump paid $3 million for recount that uncovered more Biden votes
QUIZ: Can you guess these European countries from their outlines?
Covid vaccine will not be mandatory, says Stephen Donnelly
QUIZ: How well do you know Elf?
NASA responds to young Adam from The Late Late Toy Show
QUIZ: Can you answer all the £1 million questions from Who Wants to be a Millionaire?
Two Penneys stores to open for 24 hours next week
You may also like
3 days ago
Tributes pour in after Diego Maradona dies aged 60
4 days ago
PS5 controller trigger will tighten to indicate player fatigue on FIFA 21
1 week ago
Megan Rapinoe admits 'teasing the English is such a pleasure'
1 week ago
Ryan Reynolds and Rob McElhenney's takeover of Wrexham AFC approved
3 weeks ago
Enjoy a 'Super Sundae' with a €10 No-Lose Bet on Liverpool v Man City with BoyleSports
3 weeks ago
Ryan Giggs denies assaulting his partner following arrest
Next Page