Pic: The Irish lads who blagged their way into the Super Bowl have made it to the Washington Post

After this, nobody will ever blag their way into the Super Bowl for free again.

We’re known for our charm and for the gift of the gab in Ireland and that was perhaps never better illustrated than the story of the two lads who managed to blag their way into the Super Bowl and seats worth $25,000 in Arizona on Sunday night.

The story of the exploits of Richard Whelan and Paul McEvoy, first been published on JOE on Monday, has gone viral this week and if you’ve been living under a rock and haven’t heard it yet, then you need to head over here immediately.

Richard and Paul’s story has gone so huge, in fact, that it has even made its way into the Washington Post, one of the most recognised newspaper titles in the world.

Not bad going at all. 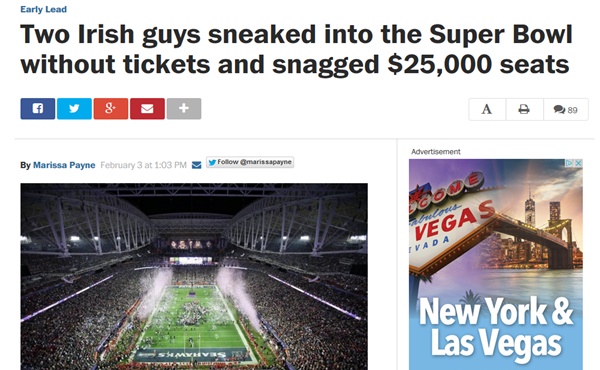 If that wasn’t good enough, they also earned an Instagram shout-out from Lawyer Milloy, a one-time Super Bowl champion and New England Patriots legend, who was seated directly behind them during the game on Sunday night and was hugely impressed with the size of their balls.

These two #Irish dudes #PaulMcEvoy and #RichardWhalen jacked two empty seat that were in front of me! Talk about having BALLS! They were cool as heck. Their story made it in the @washingtonpost #SB49 #SuperBowlXLIX: http://bit.ly/IrishSB49

Richard and Paul, if you fancy doing something similar for the Champions' League final and want some company, don’t hesitate to give us a shout.

Legends, the pair of them.

popular
Nearly 100 flights delayed at Dublin Airport on Monday
QUIZ: Can you get top marks in this short but tricky Irish geography quiz?
Family of Ashling Murphy share heartbreaking tribute at Fleadh Cheoil
RTÉ tries to solve Michael Collins murder in new documentary
Motorcyclist in his 30s dies following two-vehicle collision in Kerry
WhatsApp introduces way to choose who can and can't see you're online
Donald Trump says FBI agents 'raided' his Mar-a-Lago Florida home
You may also like
3 months ago
COMPETITION: WIN a pair of tickets to an American Football game in the Aviva Stadium
3 years ago
Maroon 5 finally recruit support acts for their Super Bowl half time show
4 years ago
This Irishman saves millions paid to injured players for the world's biggest teams
4 years ago
Here's every game mode available in the new Madden NFL 18
5 years ago
Top 10 best plays in the Super Bowl ever
5 years ago
28-year old former NFL player shot dead in the US
Next Page