PIC: This man's massive 11-month-long accumulator will come in if Kerry win on Sunday

Fingers crossed for him.

The nerves and tension in GAA fans from Kerry and Dublin will obviously be at its peak on Sunday at 3:30pm.

It's the biggest prize in gaelic football and there's nothing worse than losing an All-Ireland Final against your big rivals.

The tension for one Kerry fan from Tralee will be greater than most though because he'll have €9,750 on the line.

David Culloty made the following bet back in October 2014, he's so close. 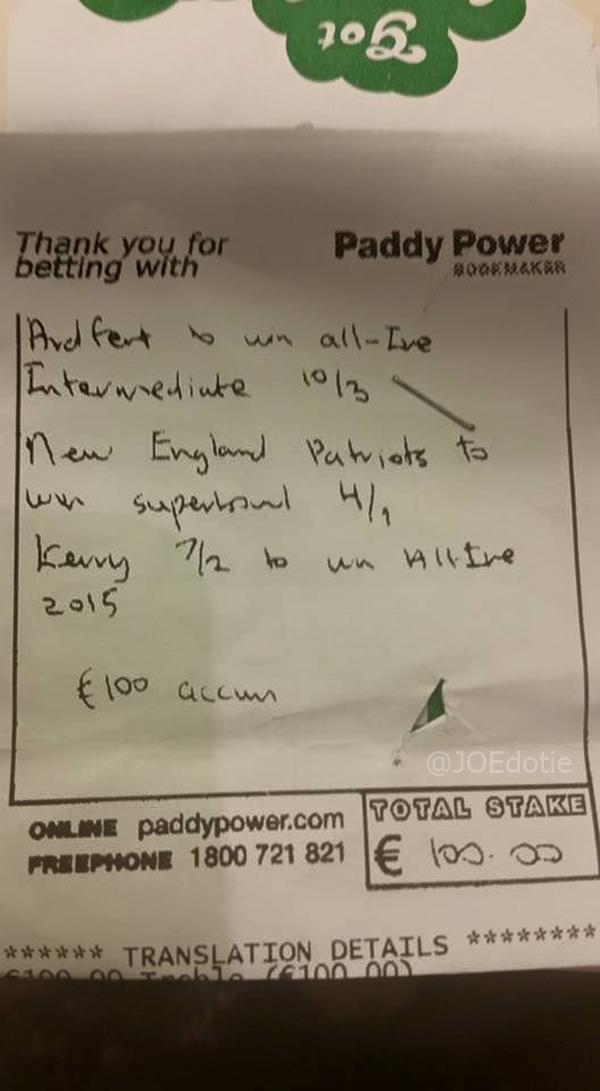 popular
Large crowds gather outside Tullamore courthouse as man charged with murder of Ashling Murphy
Amazon Prime Video has quietly added 18 big releases to its library
Over 80% of people working from home could be missing out on €100 tax relief
A gripping '90s thriller is among the movies on TV tonight
Here's the line-up for this week's Late Late Show
60 jobs available on Stena Line with 50% of your time spent not working
Ryanair's Michael O'Leary is looking for an executive assistant
You may also like
2 days ago
Over 90,000 dwellings in Ireland are vacant
5 days ago
Chapters Bookstore announces closing date after 40 years in business
1 week ago
213-bed four-star hotel and rooftop restaurant at the centre of new Clerys Quarter
1 week ago
Six teenagers arrested following car chase in Dublin
1 week ago
A man has died after a shooting in Dublin
1 week ago
Dublin bar ranks as 3rd "most mysterious" in all of UK and Ireland
Next Page