Don't praise the sudden rush to stick up for Raheem Sterling, it should have happened a long time ago

Everyone in football is coming out in defence of Raheem Sterling now. Don't praise them for doing so - they should have done it a long time ago.

Monday morning saw a number of sports journalists in England rush to their computer screens in an attempt to be the first to write a piece about Raheem Sterling after he was the subject of abuse during Manchester City's defeat to Chelsea at the weekend.

“Raheem Sterling was racially abused, and racism is bad,” was the message.

END_OF_DOCUMENT_TOKEN_TO_BE_REPLACED

Most of them missed the point.

In an incredibly brave Instagram post, Sterling called out not only the nasty racial abuse he received from a Chelsea fan on Saturday, but also the media and the difference in the approach to their coverage of black and white footballers.

Good morning I just want to say , I am not normally the person to talk a lot but when I think I need my point to heard I will speak up. Regarding what was said at the Chelsea game as you can see by my reaction I just had to laugh because I don’t expect no better. For example you have two young players starting out there careers both play for the same team, both have done the right thing. Which is buy a new house for there mothers who have put in a lot of time and love into helping them get where they are, but look how the news papers get there message across for the young black player and then for the young white payer. I think this in unacceptable both innocent have not done a thing wrong but just by the way it has been worded. This young black kid is looked at in a bad light. Which helps fuel racism an aggressive behaviour, so for all the news papers that don’t understand why people are racist in this day and age all i have to say is have a second thought about fair publicity an give all players an equal chance.

To anyone with a brain and a set of eyes, this has been clear for quite some time.

Sterling has been lambasted by tabloids for flying first-class, and for flying in economy. He has been slated for splashing out on an expensive car, and for shopping in Poundland. He was most ridiculously called out for treating himself to eating food despite the fact that he wasn’t voted Young Player of the Year last season. 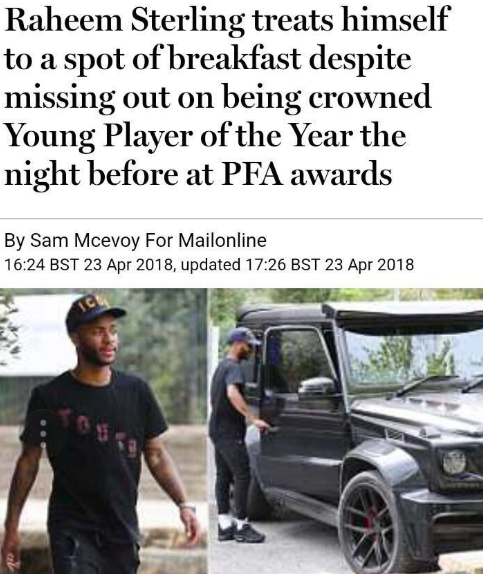 Or here's another example of the type of stuff he has had to put up with, The Sun describing him as a 'footie idiot' for absolutely no reason.

From troubled youth to £100k a week - The life of footie idiot Raheem Sterling https://t.co/BRdB5pvwRD pic.twitter.com/bMNmXEyx84

Why is he subject to this sort of guff? Because he is black. 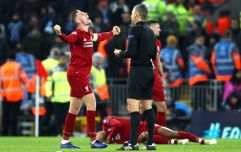 The Football Spin on Alisson saving Liverpool, Spurs getting all Spursy and the abuse of Raheem Sterling in Brexit Britain

END_OF_DOCUMENT_TOKEN_TO_BE_REPLACED

The abuse of Sterling is only one of the concerning things that happened this weekend. Dozens of journalists then weighed in on the matter, “bravely” agreeing with Sterling’s post and condemning their colleagues for their racial bias.

Condemning them about 24 months too late.

It says a lot about some of the media commentators that it took Raheem Sterling, the victim in this situation, to speak about it first before they took notice, or at least before they spoke out on it themselves.

They saw it but they paid it no mind because it didn’t affect them. They sat and worked with the same people that Sterling is calling out, and didn’t have a word to say about it until they felt it was the right thing to do.

They have bottled it for years.

It’s very easy to be on the right side of history after the fact, and that’s exactly what these cowards are trying to do. They don't deserve your praise for speaking up now; they deserve to be questioned for staying silent until now.

High profile pundits like Rio Ferdinand and Ian Wright are commending Sterling for his bravery when they should be asked about their lack of it. They should know better than anyone how hard it can be to be a young, black footballer, yet they waited for Sterling to essentially beg for a change to be made, instead of helping him while these shambolic headlines were being written. Week in, week out.

Sterling’s situation has also been compared to that of Wayne Rooney and David Beckham, with the Internet’s resident idiot Piers Morgan claiming that the same headlines were written about those two in the past, therefore meaning the coverage of Sterling couldn’t be racially motivated.

Morgan forgot to mention that Rooney was regularly misbehaving and attracted plenty of coverage for his misdemeanours. Compared to Sterling, whose biggest crime is, apparently, having breakfast in the morning.

Gary Lineker, who has praised the bravery of Sterling's Instagram post, banters with Piers Morgan regularly on Twitter and tends to have quite a solid awareness of what is right and wrong, but he has waited until now to have a go. And that’s because it was made easy for him, by Sterling himself.

On this week’s episode of Monday Night Football, Gary Neville made the point that he could have done more when Sterling approached him personally about the coverage he had been subject to while Neville was involved with the England national team in 2016.

He said he could have dealt with the real issue, rather than just telling him how much he was appreciated by the football team. Neville is one of few, if any, who has admitted that he could and should have done more.

Another point made was how nice of a guy Sterling is, and although we’re sure that’s true, it does not matter a jot.

If he was “more interested in money and cars and nightclubs” as Jamie Carragher assured us he isn't, that still would not be a factor. That would not make it okay for newspapers to write about him in a negative way, with “racial undertones”, as Carragher admitted was the case.

All of these media personalities and journalists who have come forward in support of Sterling are doing so with the best of intentions, and to an extent it will be appreciated.

But let’s not make heroes out of these men that had the perfect opportunity to make a real difference when it counted, and they bottled it.

popular
Secretary-General for Department of Health receives €81,000 salary increase
"Don't you dare lecture me" - Taoiseach and Mary Lou McDonald clash in Dáil row
Amazon Prime Video has just added 16 big movies to its library
18-year-old woman attacked with metal pole by three men in Belfast
The Tinder Swindler review: Exactly the kind of documentary Netflix should be making
QUIZ: We bet you can't get full marks in this extremely frustrating geography quiz
13 reasons why an employer can decline your right to remote working under new legislation
You may also like
3 years ago
Raheem Sterling accuses the Daily Mail of fuelling "racism and aggressive behaviour"
3 years ago
COMMENT: Stop being weird about Raheem Sterling
6 years ago
Video: Raheem Sterling tells Australian TV why he left Liverpool
6 years ago
Pic: Liverpool and Chelsea fans might agree with Joey Barton's take on Raheem Sterling and John Stones
6 years ago
Raheem Sterling's letter to Liverpool fans is not all that it seems
6 years ago
Video: This little whippersnapper just earned QPR £9m
Next Page