Mikey Drennan is taking time away from the Dublin club while he battles with depression.

The 22-year-old from Kilkenny wrote a post on his Facebook page revealing that he has been living with depression for the last three years and needs to take a break from the game.

Drennan, who spent time with Aston Villa before returning to play in the League of Ireland, has not ruled out returning to football in the future but says that now is the time for him to "be happy because life is way too short." 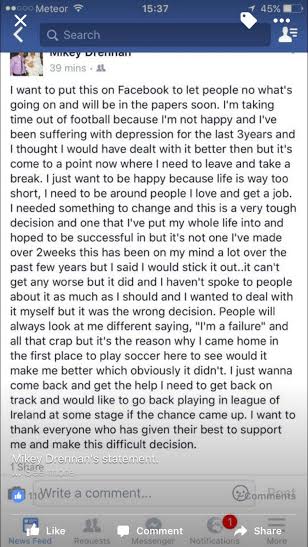 The club has also issued a statement, saying, "Shamrock Rovers can confirm that striker Mikey Drennan has been given time off by the club as a result of a personal matter.

"Mikey has the full support of all his colleagues and friends at the club; we wish him the very best and hope to see him back soon."

popular
Amazon Prime Video has quietly added 10 big new movies to its library
Clint Eastwood's final western is among the movies on TV tonight
The best memes from this year's Late Late Toy Show
The 50 most iconic songs of all time* have been revealed
QUIZ: Set Yourself Up with this General Knowledge Quiz
The JOE Movie Quiz: Week 130
The JOE Music Quiz: Week 83
You may also like
1 month ago
The JOE Friday Pub Quiz: Week 264
3 months ago
Manchester City's Benjamin Mendy charged with four counts of rape
3 months ago
Michael Ballack’s son Emilio, 18, dies in 'quad-bike crash’
3 months ago
Five football documentaries to watch to kill time before the new Premier League season
5 months ago
Christian Eriksen shares first update from hospital as he undergoes tests after cardiac arrest
5 months ago
Christian Eriksen stable but may not play football again, says sport cardiologist
Next Page