Tailgating, defeat and a whole load of craic; JOE goes to see the Miami Dolphins

‘I’m convinced you could go to the game, never watch a single snap and still enjoy yourself.’

‘Would you like to go see the Dolphins when you come over?’ was the question posed to me a few months ago by a Florida-based friend. ‘Does Flipper hate tuna’ was the answer as I scrambled to check out the schedules for when I would be in the Sunshine State.

The only game that fitted the bill for my visit was the final game of the season, Week 17’s clash with division rivals the New York Jets. All season, I had kept a beady eye on the Dolphins, hoping that the final game of the season would at least mean something. After a fine start, the Richie Incognito/Jonathan Martin bullying case looked to have derailed Miami’s season but somehow, even after a brutal 19-0 defeat to Buffalo in Week 16, the game at Sun Life Stadium on December 29 actually mattered.

END_OF_DOCUMENT_TOKEN_TO_BE_REPLACED

A win, plus either a Ravens loss or a San Diego win would put the Dolphins into the play-offs for only the second time in 12 years. My Dolphins season ticket holding friend was optimistic (as a Fermanagh and Spurs fan too, he has had lots of practice) and the mood at the pre-game tailgate was buoyant.

By the way, tailgating is frankly brilliant. Admittedly, I was experiencing it in south Florida, where the temperature hovered around 25 degrees all day. If my first time had been in Philadelphia, Green Bay or Chicago, I may not have enjoyed it quite so much. But the combination of barbecued food and beer is hard to beat and the atmosphere is superb. Friendly enough for kids to mill around throwing a ball to each other and adult enough for Jets and Dolphins fans to trade moderately friendly barbs over a few beers. It is well policed, but in a low key way and I saw zero trouble in my section.

Some folks I spoke to didn’t even have tickets for the game, they just turn up for the tailgate. It’s a shame most GAA grounds don’t have the space to give it a whirl, it would be a fantastic addition to the Championship summer. 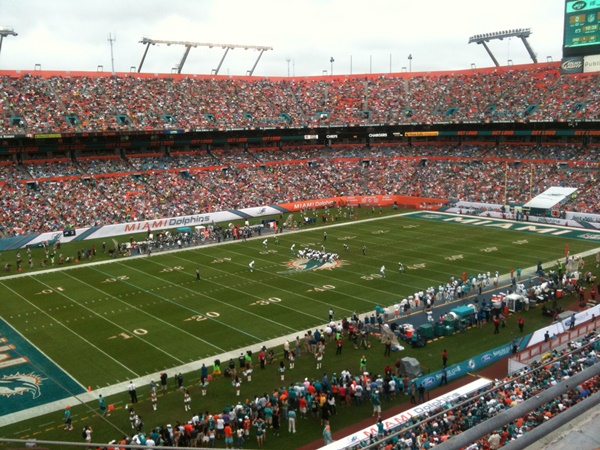 END_OF_DOCUMENT_TOKEN_TO_BE_REPLACED

My view of the game

Anyway, well fed and watered, we headed into the stands. The field, much smaller than it looks on TV, was set and ready, and after a few quick introductions, and the unfurling of the biggest Stars and Stripes I have ever seen, we were under way.

In truth, the game was not a classic. In fact, it wasn’t even mediocre. Both teams went through a few uninspiring series, the highlight of which was a ridiculously shanked 18-yard punt by Miami’s Brandon Fields, just days after he was selected for the Pro Bowl. I guess that’s the NFL version of the dreaded Manager of the Month award. The omens were not good, but news filtered through that the Bengals and the Ravens were level too. Hope lived. 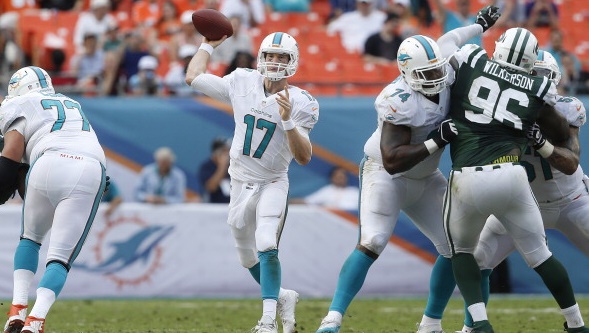 END_OF_DOCUMENT_TOKEN_TO_BE_REPLACED

Ryan Tannehill throws a pass against the Jets

Hope went through the roof as the Dolphins scored the first touchdown of the game in the second quarter. Ryan Tannehill, the latest man to try and fill Dan Marino’s very big shoes as Miami’s QB , led a 90-yard, 14-play drive that was eventually capped by a pass to wide receiver Mike Wallace in the endzone. Queue a round of high fives with strangers, a bit of spilled beer and the belief that I was set to witness something special, a Dolphins team making the post season.

Then it all went wrong. Rather too easily, rookie QB Geno Smith marched the Jets down to level and a very quick three and out gave the Jets the ball before the two-minute warning. I noticed ominous grumbles from those around me who were all too familiar with play-off near misses.

At the break, in between reasonably priced beers (cheaper than Aviva Stadium anyway) word went around that the Ravens were down 17-6. The mood was turning and more than one fan in the toilets bemoaned how everything they needed to happen was happening, bar a Dolphins win of course.

The bad mood continued. The third quarter brought the first Tannehill interception, and along with some short and overthrown passes, the man in the middle looked to be wilting under the pressure of a must win.

At the end of the third another beer was needed but just as I handed over my money, the taps ran out. Talk about omens. One quick refund later I raced back to my seat just in time to see Jets kicker Nick Folk miss a 35-yard field goal. It was a shocking miss and it briefly energised the crowd again. Maybe, just maybe this was the day the Dolphins wouldn’t screw it up.

We were wrong. Again. Another rubbish set of plays ended in a punt, allowing the Jets and Folk to go up the field and made amends and stretch the lead to 10. On the first pass of the next Dolphins series, Tannehill was intercepted by Ed Reed, which the Jets turned into another three points via Folk. 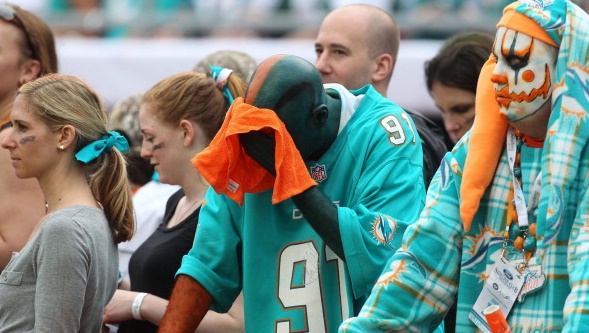 Yep, the Dolphins blew it...

Cue a rush to the exits and a fair few boos from some sections. My section, stuffed with season ticket holders who had been around to see the Marino era, also emptied and the Jets fans nearby began to taunt them as they left.

We stayed to the bitter end, long enough to see a third interception thrown by Tannehill and to receive confirmation that indeed the Ravens had been pummelled by the Bengals. A golden ticket to the play offs had been allowed to slip through the Dolphins’ fingers.

The mood wasn’t nearly as bad as the post-game trauma of the Ireland/New Zealand game. It was more of a slow demise than a knife to the heart and even the die-hard fans didn’t seem too bummed out. Perhaps it is difficult to get too riled up when you leave a ground in shorts and sandals and aim to be by the pool by 5.00. Perhaps they are just used to being let down.

Sure the game was crap, and sure the team I wanted to win lost, but there were more than enough distractions to dull the pain and bring you back for more. From tailgating to cheer leaders, extremely entertaining/insane fans to various crunchy things under melted cheese for sale at every corner, the NFL really knows how to put on a show.

The gaps in play, often quite a drag in the TV broadcasts, fly by in the stadium as the big screen keeps you posted on other games interspersed with various shots of crazy fans in the stands. I’m convinced you could go to the game, never watch a single snap and still enjoy yourself.

As a sporting event, it was easily one of the most captivating I’ve ever attended and as a spectacle it is unsurpassed. If you get a chance to go, be it in London, Miami or New York, just go. You’ll be hooked.

In fact, before we reached home, my friend was already planning to buy his season ticket for next year and the following morning he booked his flights to London so he could be in Wembley to watch the Dolphins play the Raiders in September.

I’ll probably be there too. The bug has bitten, the shirt and foam finger has been bought and my love of NFL, which I already thought was strong, multiplied ten fold in three and a bit hours. Imagine what I'd be like if I'd seen a good game?

Time for JOE to set up a Miami office I think…

popular
An action-packed thriller is among the movies on TV tonight
Woman charged over €1.2 million misappropriation of funds at local Credit Union
Boris Johnson says he is "so sad to give up the best job in the world"
Gardaí unveil new Armed Support Unit vehicles to replace older models
Temperatures to hit highs of 25 degrees as summer set to finally arrive
Tony Holohan appointed as adjunct professor in UCD
Bus Éireann’s service from Dublin to London will restart this week
You may also like
7 years ago
Video: Galway lad lands slick trampoline trick shot using an American football
7 years ago
Video: Irish people watch lacrosse for the first time and explain why it’s nothing like hurling
7 years ago
Pic: WWE’s Triple H plans to eat this mountain of food over 3 days
7 years ago
Video: College footballer performs 40-inch box jump while holding two 32kg dumbbells
7 years ago
Video: The latest People Are Awesome compilation features some unbelievably talented kids
7 years ago
Deceased coach wills $200 to all of his former players to enjoy a night out
Next Page