This is how much money the Beckhams made in 2015

David and Victoria Beckham are going to have a nice Christmas - they made £65 million last year.

The power couple - who are worth a whopping £508 million - are believed to have raked in the huge amount pre-tax through their various business interests including Victoria's fashion label and David's endorsement deals.

This includes £14.1 million through David's Footwork Productions, £34.1 million in sales from Victoria's fashion brand and £17.2 million from David's licensing and commercial interests. 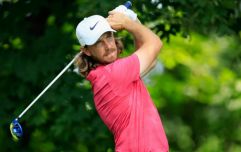 END_OF_DOCUMENT_TOKEN_TO_BE_REPLACED

The Sun reports that according to figures filed with Companies House, Beckham Brand Holdings (BBH) made post-tax profits of £12.6million, and David's Footwork Productions firm raised an extra £12.5million.

They also paid themselves and their manager Simon Fuller £3million each from BBH and David got an extra £6.5million from Footwork Productions.

popular
Netflix has just added 12 very big movies to their library
5 years ago, Hollywood took a massive gamble on a huge sequel... and lost big time
One of the most underrated crime thrillers of recent years is among the movies on TV tonight
‘Older’ woman who took Prince Harry’s virginity gives her side of the story
Woman who had sex every week with 'special friends' shares why she went celibate for a year
Netflix backtracks on anti-password sharing measures following user outcry
QUIZ: JOE's Big News Of The Day Quiz #40
You may also like
4 days ago
Harvard professor says winning lottery won't make you happy
1 week ago
Man wins $1m on lottery ticket after someone pushed in ahead of him in queue
1 week ago
Woman who earns more than boyfriend 'gets the ick' because she has to pay for everything
1 month ago
Your friends in THESE counties are quickest to pay back money they owe, new study reveals
2 months ago
Tenant tried to sell landlord's €455k house without him finding out
2 months ago
A single ticket has just landed the world’s biggest lottery win of over €2 billion
Next Page