The fate of a nation hung in the balance, apparently...

The debut of Dancing With The Stars' second season on Sunday night (7 January) has been receiving some hype in the press these past few days, and it seems as if that is all down to one single man: Marty Morrissey.

National treasure, RTÉ presenter, ambassador for the Tipperary Churn Rolling Association, it would be safe to say Marty has most boxes checked. However, ballroom dancer and nation's saviour seemed just out of his reach, until Dancing With The Stars.

And so it begins !! Delighted and Proud to be Dancing with Ksenia ! She is a brilliant dancer but God help her ...she got stuck with me ! The Craic is Mighty however...so....Let The Marty Party begin !! @DWTSIRL pic.twitter.com/GbID2wuHQ2

Suffice to say, the Irish on Twitter aren't ones to exaggerate. The outcome of Morrissey's quickstep with partner Ksenia Zsikhotska was probably going to determine the future of the Republic of Ireland, from a cultural to an economic standpoint.

A country hasn’t expected so much of one man @MartyM_RTE since Collins was sent to meet with Lloyd George, Churchill & Birkenhead. #DWTSIrl

And he did not just dance, my good people. Oh no, he soared. 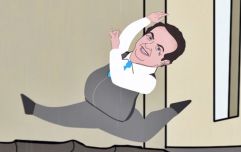 WATCH: Marty Morrisey’s dancing skills are put to good use in this hilarious new Irish cartoon

END_OF_DOCUMENT_TOKEN_TO_BE_REPLACED

In the end, Morrissey might have only earned 12 points out of a possible 30, but really, he did something much greater. When the alien archaeologists analyse the Irish Twitter activity at the beginning of 2018, they might actually deduce that it was one Marty Morrissey who kept the fabric of a nation together for at least one more season of Dancing With The Stars.

He said it perfectly, when he declared "I'm Marty and I like to party", and here is how Twitter replied:

Marty Morrissey dancing to Joe Dolan. I think we reached peak Irishness and it's not even 8 o clock #DWTSIrl

.@MartyM_RTE I refuse to join the #martyparty until you give me back my deposit. It's about €300 https://t.co/zUbDMPRsGo

Are his eyes really that blue? So many questions #DWTSIrl @MartyM_RTE

I consider @MartyM_RTE a friend more than a colleague but fear I may never be able to look him straight in the eye based solely on the opening performance in #DWTSIrl.

The time is now. You too must join the Marty Party.

popular
Amazon Prime Video has just added 38 very big movies to its library
Matt Lucas quits Great British Bake Off role
Ashton Kutcher opens up about rare disease that left him unable to see or walk
The start of the superhero takeover of Hollywood is among the movies on TV tonight
The Pogues’ Shane MacGowan rushed to hospital
Rotten Tomatoes reveals the best reviewed movie of 2022
Did you spot the explosive detail in the latest episode of The White Lotus?
You may also like
7 months ago
Marty Morrissey gives heartbreaking account on the Late Late of his mum's death following a road crash
11 months ago
Marty Morrissey pays tribute to his mother Peggy at her funeral
11 months ago
There is no such thing as an Irish celebrity
11 months ago
Marty Morrissey to step back from RTÉ after tragic death of his mother
11 months ago
Woman killed in Clare crash named as Peggy Twomey, mother of Marty Morrissey
2 years ago
Chris O’Dowd, Aidan O’Shea and more lined up for new RTÉ series, Marty in the Shed
Next Page