VIDEO: The Rock reflecting on his first ever WWE match is a must-watch

You won't believe it, but it's been nearly 20 years since Dwayne "The Rock" Johnson made his debut in the WWE.

On November 17, 1996, the young rookie - then wrestling under the name "Rocky Maivia" - stepped foot into the ring for the first time.

The third-generation Superstar's action-packed bow came at Survivor Series at Madison Square Garden, one of the most iconic live event venues on earth. Not exactly a modest introduction then.

END_OF_DOCUMENT_TOKEN_TO_BE_REPLACED

And what better way to revisit that fateful night than listening to The Rock's very own commentary on exactly what went down.

In a video feature posted to his YouTube channel called "Rock Reacts", the legendary wrestler reflected on being 'super, super, SUPER amped' in the lead-up to the match.

Baby-faced and rocking - in his own words - 'a fucking Chia Pet on my head as a haircut', Maivia's excitable entrance wasn't remotely marred by the fact that he accidentally pointed to the wrong camera, as the world got its first look at the man who would on to become the most electrifying man in sports entertainment.

After partner Jake "The Snake" Roberts was eliminated, the young Rock found himself staring down Crush and Goldust - two bad guys against one good - and as he recalls it, that's the moment his life changed for good.

With suitably dramatic music playing in the background, The Rock said in the video: 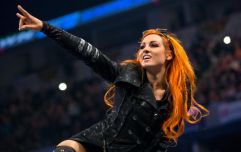 END_OF_DOCUMENT_TOKEN_TO_BE_REPLACED

Watch how the rest of the match unfolded below.

Nowadays The Rock is busy being Hollywood's highest-paid male actor, but wrestling fans will undoubtedly enjoy seeing the man who would eventually be known as 'The People's Champion' wind the clock back.

House of Rugby Ireland · Quinn Roux on finding a home in Ireland and Mike McCarthy brings the absolute HEAT!
popular
The JOE Movie Quiz: Week 86
Majority of English people 'pleased' or 'not bothered' by prospect of united Ireland
The JOE Movie Quiz: Week 85
Gardaí uncover functioning shebeen in Swords
QUIZ: The JOE Music Quiz: Week 41
Ireland adores Leitrim hurler Zak Moradi on Tommy Tiernan show
20 of the best comedies to watch on Netflix right now
You may also like
2 weeks ago
Mick Foley asks Vince McMahon to kick Donald Trump out of the WWE Hall of Fame
4 weeks ago
Chris Jericho and Bray Wyatt pay tribute to late wrestling star Brodie Lee
4 weeks ago
Former WWE wrestler Brodie Lee has died, aged 41
1 month ago
WWE Hall of Famer Pat Patterson has died, aged 79
2 months ago
The Undertaker officially confirms WWE retirement with final appearance at Survivor Series
3 months ago
QUIZ: How many of these classic WWE wrestlers can you name?
Next Page