Padraig did not pick Sergio Garcia with his heart.

The pair have a long history.

Even on Sunday morning, with the Spaniard teeing off in the last group alongside Justin Rose, the Dubliner could not pretend to be rooting for his former Major rival. 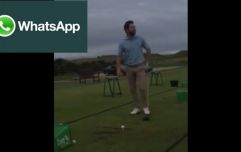 WATCH: This impression of Padraig Harrington is so good it made the European Ryder Cup team's WhatsApp group

END_OF_DOCUMENT_TOKEN_TO_BE_REPLACED

A spat that began over a rules row with Jose Maria Olazabal had its flames fanned by some epic tussles in 2007 and 2008. Harrington has previously admitted the two will never be bosom buddies.

So what a quirk of fate to find himself in the Sky Sports commentary box on Sunday night as Garcia ended his long wait for a Major with a dramatic play-off victory over Rose.

Spanish magic in the air! 🏆🇪🇸
Brought to you by @TaylorMadeTour. https://t.co/nfFioS4jwj 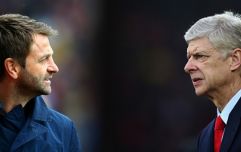 The FA Cup Final, Paul O'Connell and the Irish Open: Sport on TV this weekend

END_OF_DOCUMENT_TOKEN_TO_BE_REPLACED

"I love to see the emotion in that," he said of Garcia's fiancee's reaction. "She knows what it means to him."

Harrington may not be a big fan of Garcia, but he will recognise the lengths his rival has gone to to win a first Major at the 74th attempt. At 37, Garcia is just two years older than Harrington was when he made his breakthrough (at Garcia's expense) at the 2007 Open in Carnoustie.

But the 45-year-old stopped short of pretending to be delighted for Garcia and viewers picked up on a definite tone.

Whole lotta love out there for Garcia, apart from Harrington of course.

That bit when Padraig Harrington had to disingenuously remind the world that he was part of the history v Garcia was as cringeworthy as hell pic.twitter.com/EPQPbICLrH

Padraig Harrington looks about the only one none too happy with Garcia's win. No love lost there. #themasters

Harrington, however, is not obligated to be disingenuously happy for someone he does not get along with. It seems he maintained his professionalism when discussing Garcia's victory and that was all that was required.

When everyone in professional sport is now so scared to betray their real emotions, admit to what they are really thinking and dare to have a cut off a peer or opponent, aren't we lucky in Ireland to lay claim to such a unique character?

Harrington is loved for his fascinating, thoughtful take on life. A happy, quirky sort of a fellow who likes to chat to you about his cholesterol and has a cryotherapy chamber in his garage.

Usually smiling, often laughing, yet, when paid to go on TV and talk about golf he cuts out the bullshit and gives an honest opinion.

Yet another reason to cherish the three-time Major winner.

popular
Lidl to launch its second 'reverse vending machine' in Ireland next week
Husband of school teacher killed in Texas shooting dies of heart attack
The 2 Johnnies share unbelievable catfish ordeal affecting over 40 people
Two excellent crime thrillers are among the movies on TV tonight
Amber Heard "distraught" as court hears explicit Johnny Depp text message
Acclaimed actor Ray Liotta has died, aged 67
QUIZ: How well do you know these famous flights in movies and shows?
You may also like
5 years ago
JOE Backpacking Diary #20 - My view of those magical moments in Rio as the O'Donovan brothers made history
6 years ago
The line-up for The Late Late Show is here
7 years ago
Pic: We love Padraig Harrington's meal choice as he celebrates his first PGA Tour win since 2008
7 years ago
Pic: Look at the damage done to Padraig Harrington's plane as he travelled to the McGladrey Classic
7 years ago
Pic: Padraig Harrington takes the p*ss out of his Ryder Cup vice-captaincy role in splendid fashion
7 years ago
Paul McGinley has named three more Ryder Cup vice-captains and there's an Irishman among them
Next Page