One of the most recognisable voices in the history of Irish television left us on Wednesday morning.

RTÉ Sport have posted their retrospective on the career of the late broadcaster Jimmy Magee, who commentated on some of the greatest - and most controversial - moments in the history of Irish and global sport.

Jimmy Magee - a voice that will never be forgotten in Irish sport. A great character, a gentleman and my biggest supporter. RIP. pic.twitter.com/CpctrT0jit 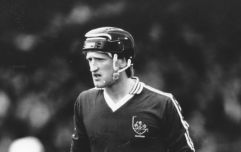 END_OF_DOCUMENT_TOKEN_TO_BE_REPLACED

Opening with his commentary of Maradona's famous solo run and finish against England at the 1986 World Cup in Mexico, to his work at the 1996 Olympic Games and his description of Katie Taylor's famous gold medal in the 2012 London Olympics, this is a fine tribute to the Louth man who first worked with RTÉ in the GPO in 1956.

For decades since, Jimmy Magee has been a constant presence in sitting rooms and kitchens up and down the country.

He passed away on Wednesday morning at the age of 82.

popular
Eurovision producers reveal "irregular voting patterns" during Saturday night's final
QUIZ: Try out one of our trickiest General Knowledge Quizzes yet
Where will 2023's Eurovision be held if Ukraine can't host?
One of Liam Neeson's best ever performances is among the movies on TV tonight
QUIZ: Can you name the disaster movie from a single image from each disaster
REVIEW: Van Gogh Dublin is a truly unique cultural experience
The JOE Movie Quiz: Week 154
You may also like
2 days ago
Much-loved character actor Fred Ward has died, aged 79
2 years ago
Actor and comedian Brendan Grace has died, aged 68
3 years ago
Georgie Burgess creator Roddy Doyle has written his own tribute to Pat Laffan
4 years ago
Full Metal Jacket star R Lee Ermey dies at the age of 74
4 years ago
Anti-apartheid campaigner Winnie Mandela has died aged 81
4 years ago
Influential physicist and author Stephen Hawking has died aged 76
Next Page