Going to Qatar for the World Cup? Here's how much a beer will cost you, and it ain't cheap...

A tournament that comes with more than one high price...

World Cup 2022 officially kicks off on Sunday (20 November), and it's safe to say we're all feeling a bit conflicted about it.

Much has been written – and will continue to be – about the controversies surrounding FIFA's decision to award the tournament to Qatar and the subsequent, deeply harmful problems since – ranging from the treatment of the LGBTQ+ community, to immediate harassment of journalists (see below) covering the competition, to the much-publicised deaths of thousands of migrant workers involved in constructing the stadiums required to host the event.

We now got an apology from Qatar International Media Office and from Qatar Supreme Commitee.
This is what happened when we were broadcasting live for @tv2nyhederne from a roundabout today in Doha. But will it happen to other media as well? #FIFAWorldCupQatar2022 pic.twitter.com/NSJj50kLql

END_OF_DOCUMENT_TOKEN_TO_BE_REPLACED

As of February 2021, the Guardian put the number of migrant worker deaths at 6,500 in the decade since World Cup: Qatar was formally given the green light.

Despite numerous and persistent calls for a boycott, the tournament gets underway in Al Khor on Sunday evening as the hosts take on Ecuador. Ordinarily, you'd look at that fixture and say it's not exactly the most mouthwatering of World Cup openers, but these are far from normal circumstances. 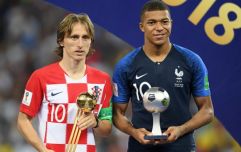 END_OF_DOCUMENT_TOKEN_TO_BE_REPLACED

Is the first ever winter World Cup tainted beyond salvation? Probably. Will millions of people still watch it anyway? Definitely. And plenty are travelling over there, too. If you happen to be among them or you were just curious enough to click into this piece, let's take a look at how much a beer will set you back if you're milling about the main fan zone.

Though Qatar is not technically a "dry" country, it is illegal to consume alcohol in public. FIFA, doing what FIFA tends to do, managed to secure its own designated area where alcohol may be enjoyed.

The main fan zone in central Doha will exclusively serve Budweiser, while the venue boasts a capacity of 40,000 people.

Atmosphere-wise, what can one expect over there? Heat. Lots of it. Check out footage of an official fan zone in 32-degree sunshine below, as captured by UK Times journalist Matt Lawton. Woodstock '99 vibes, to say the least...

First look at the official fan zone here in Doha. Accommodates 40,000 people but there’s not much shade #WC2022 More on ⁦@TimesSport⁩ later pic.twitter.com/yWTdqiW2p8

Not ideal, really. Meanwhile, the good time vibe continues with further confirmation that those looking to cover the tournament on a professional basis have been met with difficulties from local security.

American football writer Grant Wahl took to Twitter on Tuesday night to note that he met with strong opposition after taking a photograph of a slogan on the wall of the media centre he was working in.

"I took a picture of the Qatar World Cup slogan on the wall of the media centre today – and a security guard came over and demanded that I delete it from my phone," said Wahl.

"Is that how this World Cup is going to work?"

NEW: I took a picture of the Qatar World Cup slogan on the wall of the media center today—and a security guard came over and demanded that I delete it from my phone. Is that how this World Cup is going to work? Story: https://t.co/RXyfq1PANk pic.twitter.com/SPmG5CnrjQ

popular
Katherine Ryan says famous TV star is a ‘predator’ and everyone in industry knows
20 years ago, one of the best sci-fi movies of the 21st century was a box-office bomb
Man fired for not being "fun" at work wins legal battle, nobody has to be fun now
The JOE Movie Quiz: Week 181
QUIZ: JOE's Big News Of The Day Quiz #19
The JOE Friday Pub Quiz: Week 322
I'm A Celeb public outcry after Matt Hancock makes it into the final
You may also like
4 months ago
JOE Gaming Weekly - FIFA 23 will feature women's club teams for the first time ever
10 months ago
Here's the line-up for this week's Late Late Show
1 year ago
A football hater asks a football lover five questions about FIFA 22
1 year ago
The 'gamer lean' is real and it genuinely helps you win at FIFA
2 years ago
EA fined millions by Dutch court over FIFA Ultimate Team loot boxes
2 years ago
QUIZ: How well do you know these classic FIFA covers?
Next Page