Don't worry, it's not the bacon emoji.

We recently told you about all the new emojis coming to your phone this summer, but one that was mean't to be on that list has been banned.

Unicode, the organisation in charge of selecting and overseeing emojis, has decided to remove the rifle emoji, according to Buzzfeed. 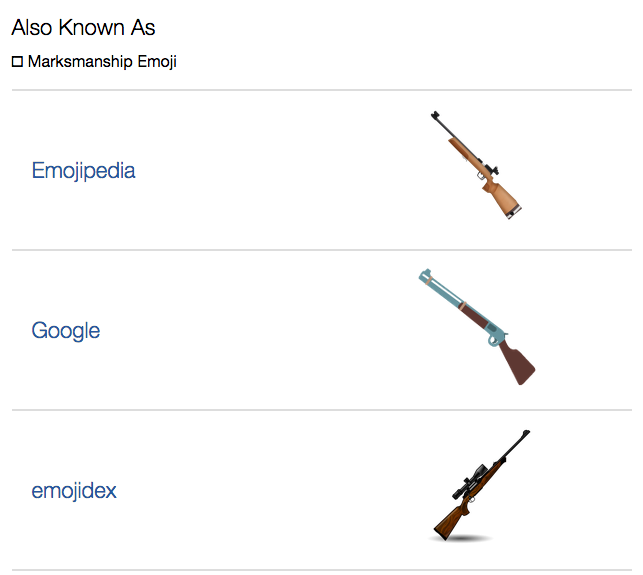 END_OF_DOCUMENT_TOKEN_TO_BE_REPLACED

The decision was influenced by Apple, one of Unicode's biggest member companies.

The emoji initially passed Unicode's review, but there had been talks of banning the rifle emoji since last October, when a gun-control campaign shared their concerns about the influence emojis now have on people.

Although the decision to officially remove the rifle emoji was made at a meeting in May, it has yielded a lot of attention in recent days due to the shooting in Orlando and the ongoing debate on gun control.

Many commenters have pointed out that the pistol emoji still exists on smartphone keyboards.

popular
Harvard study reveals how many times men should ejaculate each month to stay healthy
Parents left in shock after gorillas start mating in front of kids at zoo
Colin Farrell shouldn't win the Oscar this year
Conor Mcgregor hit by car ‘at full speed’ while cycling
The JOE Friday Pub Quiz: Week 331
Man wins $1m on lottery ticket after someone pushed in ahead of him in queue
Close call as Paul McCartney tries to pose on Abbey Road crossing
You may also like
3 years ago
'OK' hand sign added to list of hate symbols
3 years ago
People who use emojis on dating apps get more dates and have more sex
4 years ago
The two least used emojis have been revealed
4 years ago
Latest iOS update will finally give FaceTime users what they've been asking for
4 years ago
Ginger emojis have finally arrived
4 years ago
Redheads, llamas, and salt - just some of the 157 new emojis to be released in 2018
Next Page