This could shake things up.

Apple has announced a new streaming service called Apple TV+ in which subscribers will only pay for the channels they want.

Announced at Monday's Apple Event, the new service will allow viewers to pay for only what they watch, watch shows offline as well as on, and share shows with family. The service will be available as a redesign of the currently existing Apple TV app, and will come to iOS devices in May and Mac later in the year.

END_OF_DOCUMENT_TOKEN_TO_BE_REPLACED

It will be available on smart TVs as well as streaming devices from Roku and Amazon. Subscribers will be able to purchase channels individually - called Apple TV Channels - as well as being able to stream services like Amazon Prime Video.

Present at the launch was director Steven Spielberg, who revealed that his new show would be available on the service.

Introducing Apple TV+.
A new streaming service with original stories from the most creative minds in TV and film. #AppleEvent pic.twitter.com/xLhtdNNaa2 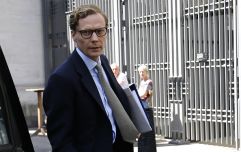 END_OF_DOCUMENT_TOKEN_TO_BE_REPLACED

At the event, held at Apple's campus in Cupertino, California, also saw a host of further announcements. The company unveiled Apple Arcade, a gaming service which will host games not seen on any other mobile devices.

Apple News+ is a new premium version of the Apple News app which will see magazine content available for the first time, while the company also revealed that it would be releasing a credit card called, you guessed it, the Apple Card.

popular
Amazon Prime Video has just added 38 very big movies to its library
Mia Khalifa claims seaside town is better than Miami
The Banshees Of Inisherin is arriving on Disney+ sooner than you might expect
U2 drummer Larry Mullen Jr. says band may perform without him in 2023
The 50 most iconic songs of all time* have been revealed
Woman hit by rollercoaster is trapped in own body after finally awaking from coma
The JOE Movie Quiz: Week 182
You may also like
4 days ago
Netflix has just added 30 big movies to its library
1 week ago
One of the best movies of the decade has just been added to Netflix
1 week ago
Netflix's new show is basically The Masked Singer if it made even LESS sense
1 week ago
All of the big new Netflix movies and shows arriving in December
1 week ago
You can watch Netflix's new heist series NINE MILLION different ways
2 weeks ago
Netflix has just added 10 big movies to its library
Next Page