These artificial skin phone cases are the stuff of nightmares

First they came with faux-skin cases, and we said nothing...

Technology is constantly evolving, adapting, and improving, and it's often difficult to keep apace with the latest developments.

But sometimes you're better off not keeping up...

Especially when Marc Teyssier at Telecom Paris in France and his colleagues have devised an artificial skin for interactive devices that responds to your touch.

Your touch or... tickle, pinch and squeeze.

You'd be forgiven for thinking this is actually a leaked plot from the next series of Black Mirror, but alas, we regret to tell you this is real. 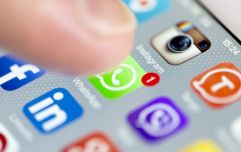 END_OF_DOCUMENT_TOKEN_TO_BE_REPLACED

But thankfully, it's not on sale yet and will instead be presented at the ACM Symposium on User Interface Software and Technology in New Orleans.

The artificial skin is made of three layers, consisting of a layer of stretchable copper wire sandwiched between two layers of silicone. Pressure on the skin changes the electric charge of the system.

"When we interact with others, we use skin as interfaces," explained designer Marc Teyssier.

"However the objects of mediated communication — such as the smartphone — still has a cold interface that doesn't allow natural interaction and input. In this project, I wanted to make available the perfect human interface that is the skin for existing devices."


popular
Gardaí to be given power to enforce social distancing regulations
QUIZ: Can you name all of these characters from Love/Hate?
Modelling suggests Ireland may have already hit its peak for Covid-19 deaths
WATCH: Paul O’Connell provides the single greatest moment in the history of A Question of Sport
There's a "Super Pink Moon" tonight, the biggest and brightest moon of 2020
The ultimate UK Office quiz - Season 1
QUIZ: We give you the theme song, you tell us the TV show
You may also like
1 week ago
Houseparty says it found "no evidence" to suggest the app has been hacked
1 week ago
Vodafone donates 1,000 new smartphones to charity for the elderly
1 week ago
Revolut partners with Irish Red Cross to help support volunteers and communities affected by coronavirus in Ireland
1 month ago
Next time you're in UCD, keep an eye out for a flying spice bag
1 month ago
Air New Zealand wants to introduce bunk beds on its flights for economy classes
1 month ago
Social media is too far gone for kindness to win
Next Page