Jack Dorsey, best known as the founder and CEO of social media site Twitter, appears to have had his own personal Twitter account hacked this evening.

Twitter has come under fire over the last few years for its ineffectual approach to removing harmful accounts from the site. It is also famously a favourite media tool of US President Donald Trump.

On Friday evening, it became apparent that Dorsey had been hacked when his account started tweeting racist messages, and retweeting messages such as "Nazi Germany did nothing wrong." His account also tweeted "Intel is there is a bomb at Twitter HQ."

One of the tweets was a racial slur in capital letters. 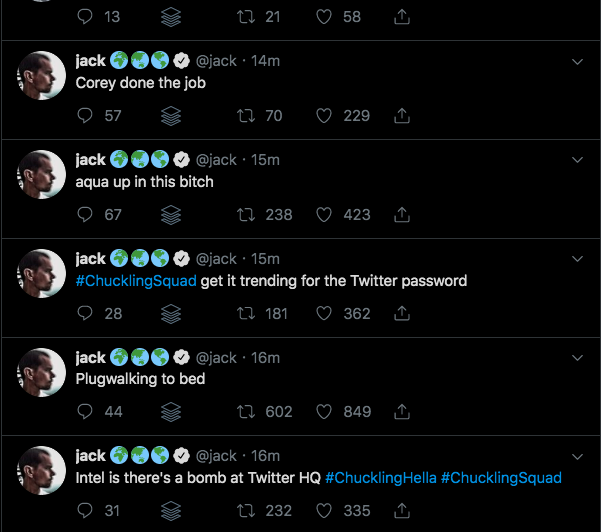 The tweets have since been removed from the account, though Dorsey has not yet issued a public statement.


popular
WATCH: For the first time since 2011, someone has won the Winning Streak jackpot of €500,000
15 new documentaries you should be watching on TV in 2020
QUIZ: How well do you know Will Smith's movie career?
The JOE Friday Pub Quiz: Week 174
15 films from the last 15 years that legitimately deserve to be on the Leaving Cert
Temperatures drop to -4 as weather warning is in place for 17 counties
You may also like
1 month ago
These were the most popular tweets in Ireland in 2019
2 months ago
25 of the funniest tweets you might have missed in October
2 months ago
Twitter bans all political advertising on the website
3 months ago
People running abusive Twitter accounts should be "educated" instead of banned, Twitter tells Oireachtas committee
3 months ago
Coleen Rooney accuses Rebekah Vardy of leaking stories to The Sun after elaborate plot to catch her out
3 months ago
Burger King punished for Nigel Farage milkshake tweet
Next Page