Apple are working on a crumb-resistant keyboard

Have you ever tried to clean out the gunk in your keyboard? It isn't pleasant.

More often than not, if you're working at your laptop at the office or at home, then you'll be spending enough hours in front of the screen that meals will need to be taken there. 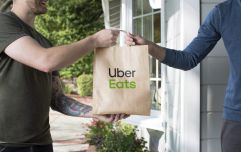 END_OF_DOCUMENT_TOKEN_TO_BE_REPLACED

And eating meals means making crumbs, and those crumbs will invariably end up in your keyboard, because apparently the only place in this universe that crumbs of food really want to be is collecting under your space bar.

There are ways around it - a weird cover-all that isn't pleasant to type with, or that odd flubber stuff that you mash into the keyboard and pulls out all the gunk - but this is treating the symptoms, not the cause.

So you'll be happy to know that Apple have patented a crumb-resistant keyboard, and all of a sudden, the world is a brighter, less crummy place.

The patent (which you can check out some preliminary images for right here) includes plans to plug up the gaps between the keys and the rest of the board, or installing a special membrane which will release air every time a key is pressed, thereby shoving all the crumbs and gunk out every time you use the keyboard.

However, we do have some bad news, as according to reports by The Verge, while Apple made the patent public knowledge this week, they've actually had the patent since 2016.

So anyone hoping to be able to get some work done without losing half their sandwich to the keyboard trolls, looks like we've got a while to wait yet.

House of Rugby Ireland · Munster's nail-biting win, European games in doubt and Darren Cave interview
popular
Hands on with the Sennheiser CX 400BT True Wireless
Several baby food products sold across Ireland have been recalled
50 more people with Covid-19 have died, 3,498 new cases
Gardaí appeal to the public to stay at home this weekend
Netflix announces new true crime documentary about terrifying LA hotel
Pfizer to temporarily reduce vaccine deliveries to Europe
You may also like
1 week ago
31 closure orders and 9 prohibition orders served on Irish food businesses in 2020
1 week ago
McDonald’s to keep drive-thrus open and maintain delivery service during lockdown
4 weeks ago
The perfect turkey curry recipe to try this Christmas
1 month ago
A new Krispy Kreme store is set to up in Dublin city centre
1 month ago
REVEALED: The winners of all 28 categories in the 2020 Just Eat National Takeaway Awards
1 month ago
All 77 restaurants in Ireland shortlisted for the 2020 Just Eat National Takeaway Awards
Next Page