Then we will help left that rock you've been living under, because it is one of those things that has essentially taken the world by storm. 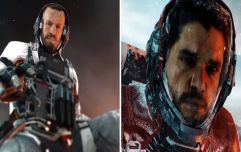 END_OF_DOCUMENT_TOKEN_TO_BE_REPLACED

A co-op sandbox survival game for the PS4, Xbox One and PC, this is essentially PlayerUnknown's BattleGrounds meets Minecraft, this time-consumer has players teaming up to defeat other teams of players, and using their building skills to create defences in order to last in the game longer.

And one added this weekend looks more than a little familiar...

Wiggle your way to Victory!

The New Boneless Emote is in the shop now! pic.twitter.com/Q2ShzdMcpW

Where did we see that before?

And we were not the only one to notice the similarity...

When @TheNotoriousMMA kills someone in @FortniteGame pic.twitter.com/jFEn3yKvAt

popular
Seven people hospitalised after huge fight at Tuam cemetery
One of the most-anticipated movies of the last few years is finally available to watch at home this week
Retail billionaire calls on unvaccinated people to be banned from shopping centres
It looks like Garth Brooks will play FIVE nights in Ireland after all
Simon Harris and wife welcome arrival of new baby boy
Government announces special €1,860 payment for laid-off workers during pandemic
Gardaí warn of scam involving "inappropriate or sexual images" after young boy blackmailed for money
You may also like
1 week ago
WATCH: Conor McGregor and Machine Gun Kelly face off at MTV VMAs
9 months ago
Jake Paul calls out Conor McGregor in nasty video
1 year ago
Conor McGregor responds to Paschal Donohoe’s calls to encourage social distancing amongst Irish public
2 years ago
"I was in the wrong" - Conor McGregor apologises over incident in Dublin pub
2 years ago
Charges dropped in Conor McGregor phone-smashing case
2 years ago
WATCH: New footage released of Conor McGregor allegedly smashing fan's phone in Miami
Next Page