An app that will prove very useful for millions of deaf children worldwide.

Following the recent launch of their Mate 20 Pro device, Huawei has announced the launch of StorySign, an app that will help enrich story time for deaf children and their parents.

There are approximately 32 million deaf children globally and many struggle to learn to read, often due to a lack of resources bridging sign language and reading.

Sign has no written form as there is no direct English word-for-word translation, which poses a huge challenge to deaf children learning to read. Alongside a lack of resources, many children do not get access to sign language at the crucial early learning stages; 90% of deaf children are born to hearing parents and 61% of those parents in Ireland admitted they only know some sign language or don’t know how to sign.

Created in conjunction with experts and charities for the deaf community, the app features a friendly avatar, Star, who guides children and parents through a selected children’s book, translating it into perfect sign language and signing along to the story in real time.

Pioneered by Huawei and featuring the beloved book ‘Where’s Spot’ by Eric Hill, StorySign is available for free in Ireland. The app is launched in partnership with the Irish Deaf Society to raise awareness and much needed support for the charity. 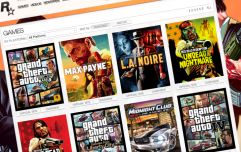 END_OF_DOCUMENT_TOKEN_TO_BE_REPLACED

Members of the public can make a donation to the Huawei charity partners, which will go to support deaf literacy projects across Europe, including creating more books to go into the StorySign app, here.


popular
Met Éireann state that three days of snow, hail, and sleet is coming for parts of Ireland
Gardaí name the three children that were found dead in a Dublin home
The JOE Friday Pub Quiz: Week 175
Viewers raise over €300,000 after Munster's Billy Holland and wife Lanlih's emotional Late Late Show appearance
The shortlist for the best breakfasts in Ireland has been revealed
QUIZ: We give you the movie title, you tell us the dog breed in it
QUIZ: Name the missing word from these famous Derry Girls quotes
You may also like
4 months ago
New app allows online shoppers to support the fight against homelessness in Ireland
8 months ago
Irish naval squad to take part in loaded march to raise funds for neonatal facility in Cork
9 months ago
Charity tractor run from Dublin to Mayo seeks to raise thousands for three worthy causes
1 year ago
Three members of The Hardy Bucks set to embark on epic charity journey on foot across Ireland
1 year ago
Earning stamps on this loyalty card will help fight world hunger
1 year ago
St Vincent de Paul appeal for public support ahead of a busy Christmas period
Next Page