The argument has long been there; is there any real need for smartwatches? Clunky apps and meagre battery life have been a nagging companion of most iterations of the wearables to date.

But the new Huawei Watch GT has followed Samsung’s lead and ditched Wear OS in favour of its own LiteOS operating system.

END_OF_DOCUMENT_TOKEN_TO_BE_REPLACED

And you should mourn because Wear OS ever existed, and rejoice at the news of its departure, as it means the bespoke OS and innovative dual-chipset design of the Huawei GT can come to the fore.

The smartwatch that promises weeks (two weeks, to be exact) of battery life. The one that would prise the smartwatch market away from Apple and Samsung; was it finally alive and well among us?

The Huawei Watch GT is currently being given away free with the Huawei P30 Pro, but usually costs €199.

END_OF_DOCUMENT_TOKEN_TO_BE_REPLACED

The Huawei Watch GT is a smartwatch that really, really, really wants to have the appearance of a normal watch but like many recent wearables, it leans heavily towards sports tracking.

It's not the most beautiful watch in the world but you'd never consider it ugly on your wrist and it's suitable for a variety of occasions.

I tried the sport model, which came with a black ceramic and metal case and black silicone wrist band, which was very thin and comfortable to wear for every day use. But there are other customisable versions you can buy.

It is a pure circle shape of 1.39 inches in diameter, and the touchscreen panel supports both touch and swiping gestures, which allows for better navigation directly on the watch.

END_OF_DOCUMENT_TOKEN_TO_BE_REPLACED

The top physical button brings up a list of all the installed apps and functions. Pressing the bottom button once will open the fitness tracking menu, where you can choose a variety of workouts from running through to swimming and climbing.

As we mentioned earlier, Huawei has done away with Wear OS and replaced it with its own bespoke OS, and it performs well.

In fact, it contributes to a battery that is capable of lasting two weeks, according to Huawei. The watch we tested didn't quite last the 14 days with regular use, but it did breach the 10-day mark with a little to spare.

One major issue with Wear OS is that many of the sensors and monitors, such as the sleep monitor function, were rendered moot by the fact that the watch needed to be charged every couple of days. But you can get a full week of uninterrupted sleep analysis with the Watch GT.

For the record, I don't get enough sleep, according to the analysis.

In terms of activity tracking, it has standard exercises like running, jogging and rowing, and also includes an altimeter to give advanced readings like elevation when hiking. 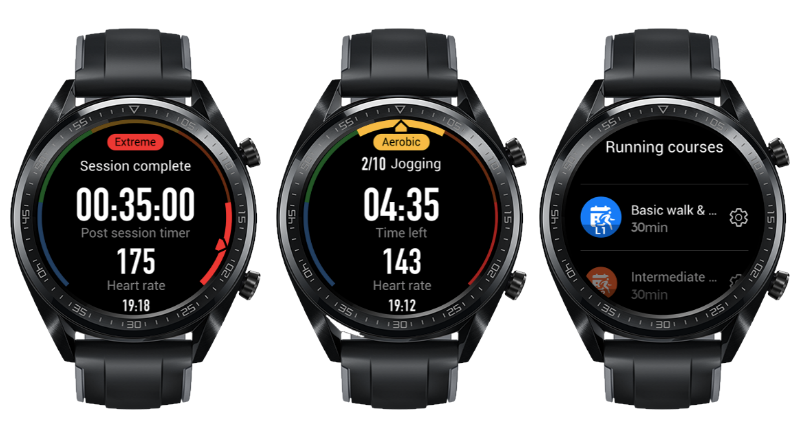 It’s water-resistant up to five metres, meaning you’re free to use the Watch GT when swimming. It also offers specific tracking modes depending on the type of swimming you’re doing, such as freestyle, breaststroke, backstroke, butterfly and more.

Huawei have done away with some of the bells and whistles you have come to associate with wearables; for example, you can’t answer calls on the Watch GT, but you are able to reject them.

And while you can read messages in apps such as WhatsApp, you aren't able to respond to them.

Huawei has left many of the normal, finicky inclusions in smartwatches on the outside and it's clear the watch is better for it.

Smartwatches have historically focused on features like using Google Assistant and playing music among others and while these are nice additions, realistically, how often will you use them?

Huawei were clever and created a watch, and then added fitness features around it.

If you're thinking of buying a P30 Pro, this is a nice little addition along with it.

popular
One of the best movies of the decade has just been added to Netflix
20 years ago, one of the best sci-fi movies of the 21st century was a box-office bomb
Surprise frontrunner emerges as potential next James Bond as producers 'love him'
U2 drummer Larry Mullen Jr. says band may perform without him in 2023
Katherine Ryan says famous TV star is a ‘predator’ and everyone in industry knows
One of the scariest films of all time is among the movies on TV tonight
Die Hard and Top Gun actor Clarence Gilyard has died, aged 66
You may also like
1 week ago
The Menu works because it makes fun of absolutely everyone
2 weeks ago
REVIEW: 1899 is Netflix's latest attempt to recapture the magic mystery of Lost
3 weeks ago
In The Crown Season 5, Prince Charles is no longer the biggest "villain"
3 weeks ago
God of War Ragnarok proves it's hard to improve on near perfection
1 month ago
REVIEW: Barbarian is one of the best scary movies of the last few years
1 month ago
REVIEW: Gotham Knights isn't perfect but it is a hell of a lot of fun
Next Page