Instagram to test hiding likes on photos in Ireland from today

Instagram has announced it is running a test in Ireland that removes the total number of likes photos and video views in Feed, Permalink pages, and Profile.

The platform announced the news on Wednesday, stating it wants users to concentrate on the photos and videos shared, rather than the amount of likes and views these posts gather.

People can still see their own likes by tapping on their likes list, but others will not be able to see how many likes a post has received.

Instagram users will not be able to see how many likes others' posts have received.

When announcing plans for the change at the F8 conference earlier this year, Mark Zuckerberg explained: “You can see who liked a photo or video, you can tap through to see [the list], and if you have the time you can add them all up yourself.” 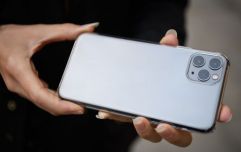 Apple pushes back against EU plans for universal chargers

END_OF_DOCUMENT_TOKEN_TO_BE_REPLACED

The test initially began in Canada but has been extended to Ireland as the company explores the effects of the trial on different audiences.

"This includes helping people to focus on the photos and videos they share, not how many likes they get. We are now rolling the test out to more countries so we learn more from our global community and see how this can benefit people's experiences on Instagram."


popular
The JOE Friday Pub Quiz: Week 175
The shortlist for the best breakfasts in Ireland has been revealed
The 50 most iconic songs of all time* have been revealed
Bodies of three children discovered in Dublin home
Two operators of illegal puppy farm in Roscommon convicted of animal cruelty
QUIZ: Can you guess the pixellated movie posters?
The JOE Friday Pub Quiz: Week 174
You may also like
1 week ago
Irish mobile network GoMo introduces €12.99 a month for life offer
2 weeks ago
Irish mobile network GoMo extends €9.99 per month for life offer for one more week
3 weeks ago
WhatsApp will stop working on certain phones from New Year's Day
1 month ago
REVIEW: The Nokia 800 Tough and Nokia 2720 Flip, phones from a simpler time but with modern-day quirks
1 month ago
Warning issued to consumers over online retailer Click.ie
1 month ago
Irish mobile network GoMo to end €9.99 per month for life offer in January
Next Page