This will annoy a lot of people.

Instagram will test hiding the like count from photos, and view counts from videos, in an effort to get users to pay attention to the content itself and not their associated engagement metrics. 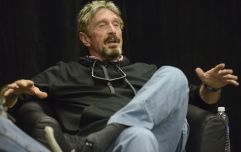 END_OF_DOCUMENT_TOKEN_TO_BE_REPLACED

The Facebook-owned app announced the news on Tuesday at Facebook's F8 conference this week.

"Later this week, we’re running a test in Canada that removes the total number of likes on photos and video views in Feed, Permalink pages and Profile," Instagram said.

"We are testing this because we want your followers to focus on the photos and videos you share, not how many likes they get."

While they've no immediate plans to roll this plan out globally, the prospect of it hasn't been ruled out by Instagram who say they want people to be comfortable expressing themselves without the pressure of gathering likes.

According to her findings, the feature on the Instagram app came with the following message: "We want your followers to focus on what you share, not how many likes your posts get."

as stated in the app: "We want your followers to focus on what you share, not how many likes your posts get" pic.twitter.com/MN7woHowVN

popular
Amazon Prime Video has quietly added 10 big new movies to its library
One of the best Irish movies ever made has just been added to Netflix
The 50 most iconic songs of all time* have been revealed
House of Gucci has the best sex scene from a big Hollywood movie in years
Clint Eastwood's final western is among the movies on TV tonight
8 great new additions to Amazon Prime Video in December
QUIZ: Can you name all of these Succession characters?
You may also like
3 weeks ago
Who started the 'plant one tree for every pet picture' trend on Instagram?
1 month ago
Kanye West has legally changed his name to "Ye"
1 month ago
Facebook apologises as users having trouble accessing its apps for second time this week
1 month ago
Panic is over: Instagram, WhatsApp and Facebook are back after major outage
6 months ago
Donald Trump will not be allowed back on Facebook or Instagram
1 year ago
The most Instagrammed honeymoon destinations in the world have been revealed
Next Page