In this world nothing can be said to be certain, except death, taxes and a new FIFA every Autumn.

Gameplay video of FIFA 19 leaked on Reddit this week, and gave us a first glimpse at the game’s new features.

The new edition of the best-selling football game was officially announced last month, with the big new addition being the official Champions League.

A trailer was also released, but like a lot of announcement trailers it didn’t actually show the game in action, just some flashy clips of Cristiano Ronaldo running around.

Over on Reddit though, video of Europa League gameplay has turned up. Or more accurately, it did turn up, and then get pulled down again, because EA's lawyers are on it quicker than Mo Salah gets onto a Roberto Firmino assist. 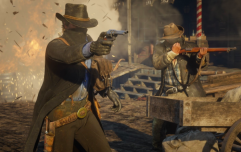 The cheat codes for Red Dead Redemption 2 are already available

END_OF_DOCUMENT_TOKEN_TO_BE_REPLACED

However, the video did give us some new morsels of info about FIFA 19.

First up, the Europa League has it's own set of commentators - Martin Tyler and Alan Smith are still in the game, but for the Europa League we get Derek Rae and Lee Dixon, to give it those Thursday night vibes.

Rate this out of 10? pic.twitter.com/HKFoOzTgdX

END_OF_DOCUMENT_TOKEN_TO_BE_REPLACED

The user interface and menus have also been updates and look a lot cleaner and more user friendly.

The gameplay seems pretty similar to last year, which isn't necessarily a bad thing. Of course, there are already people complaining about that, because there are always people complain that FIFA isn't as good as it used to be. Let's face it, the best FIFA game was the one that came out when you were 14 years old, and could spend all your time playing it.

In other FIFA 19, tweets from the ACGHK convention in Hong Kong appear to confirm the inclusion of Chinese Super League teams. Which we're sure you are all super excited about, right? I mean, if you can't play as Chris Coleman's Hebei China Fortune side, what even is the point?

popular
Disney+ has just added 10 big movies to its library
25 years ago, Sylvester Stallone delivered his best performance in a hard-hitting crime drama
Why Bran Stark is the true villain of Game of Thrones
The 50 most iconic songs of all time* have been revealed
QUIZ: You'll need to be razor-sharp to get 100% in this General Knowledge Quiz
QUIZ: You'll do well to get 100% in this General Knowledge Quiz
The JOE Movie Quiz: Week 167
You may also like
3 years ago
12 games still to come in 2019 that we're hugely excited to play
3 years ago
WATCH: New footage from the new World War Z game looks absolutely bonkers
3 years ago
WATCH: Live broadcast of upcoming video-game pulled due to sexual content
3 years ago
Far Cry: New Dawn is the sequel we didn't want, need, or ask for, but is still good fun
3 years ago
Resident Evil 2 is the first great game of 2019
3 years ago
You can play the first 30 minutes of the Resident Evil 2 remake for free
Next Page