Listen: Have you heard the Irish guy on the radio in GTA V yet?

If you're anything like JOE, then you've been playing this game non-stop for the last two weeks, so you might have come across the various references to Ireland in the game, from one as Gaeilge to the little nod to Father Ted, but you may have missed the Irish guy appearing on the radio. 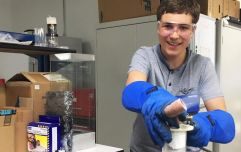 END_OF_DOCUMENT_TOKEN_TO_BE_REPLACED

He appears on the radio station WCTR Talk Radio with the infamous Lazlow Jones, who has been in quite a few of the Grand Theft Auto titles at this stage, and he's discussing being part of the Children of the Mountain fellowship, and tries to convince Laslow to change his ways.

Being the helpful sorts that we are, we've set the video to play from the point where he appears (as this video is the full audio for that particular station) but if for some reason that's not working for you, then jump ahead to the 14:09 mark to listen in.

Hat-tip to Aaron Howey for sending this our way

popular
Netflix has just added 33 very big movies to its library
The full list of cancelled flights in and out of Dublin Airport on Monday (so far)
QUIZ: Can you guess the crisps from the pixelated packet?
Six people dead after mass shooting at Fourth of July parade in Illinois
One of the coolest movies of recent years is now available to watch at home
QUIZ: It's time for one of our trickiest General Knowledge Quizzes yet
An underappreciated sci-fi blockbuster is among the movies on TV tonight
You may also like
6 days ago
Man arrested in connection with 1981 murder of Nora Sheehan
6 days ago
Teenager in critical condition after car hits tree in Cork
2 weeks ago
The Obamas are heading to Cork to film their first Netflix series
3 weeks ago
Six towns in Ireland set to be picked for new Night-Time Economy pilot programme
1 month ago
Woman dies and two children rescued after car enters Cork river
1 month ago
Galway named one of the top 10 best European cities to raise a family
Next Page