Pic: Assassin’s Creed is set for Victorian London next according to leaked screenshots

Even though the latest one is just out, we’re already looking forward to the next one…

Screenshots leaked from the game suggest that the latest installment is set to forgo Paris and instead travel across the channel to London, England in the 19th Century.

The guys and gals over at Ubisoft really have to get a handle on security as this is not the first time that images have been released early. 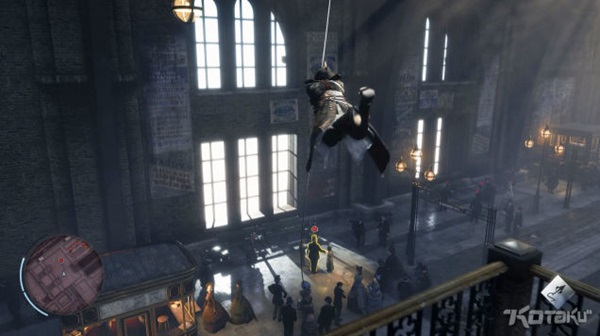 END_OF_DOCUMENT_TOKEN_TO_BE_REPLACED

Now, while we have our doubts about the ‘leaked’ photos (mainly that we think they were released to build hype for the game rather than an actual leak), there is no doubt that the idea of an Assassin’s Creed based in London would be class.

The game is reportedly called Assassin’s Creed: Victory, but apart from this and a couple of leaked images, the details about the rest of the game are few and far between.

We are entirely convinced that Hugh Grant will voice one of the characters and the rest will be made up of dire attempts at a posh English accent.

Scratch that, just let Hugh Grant voice all the characters…

All images via Kotaku.

The Big Reviewski || JOE · The Big Reviewski with Ray Liotta, Goodfellas facts & Tom Hanks making us cry
popular
National minimum wage in Ireland to be increased in the coming year
One of the most-anticipated movies of the last few years is finally available to watch at home this week
QUIZ: Can you name the flavour of crisps just from the packet?
Revolut finally rolls out feature which allows users access wages before payday in Ireland
Taoiseach says he would like to see Garth Brooks play in Cork next year
Frontline workers could receive bonus payments or time off for efforts during pandemic
The iconic Busarás station in Dublin is set for a major facelift
You may also like
1 week ago
Deathloop review: The lovechild of BioShock and Dishonored
1 week ago
10 of the most exciting reveals from the PlayStation Showcase event
1 month ago
These are the free subscription games coming to PlayStation and Xbox in August
2 months ago
Pro Evolution Soccer has been killed off after 26 years
2 months ago
Netflix to start offering video games as part of service
2 months ago
FIFA 22 unveils biggest Career Mode update in years with 'Create A Club'
Next Page