PIC: Irish teenager breaks up with girlfriend for a reason that FIFA lovers would deem perfectly acceptable

This is what happens when you annoy somebody during a game of FIFA.

It hardly needs to be stressed how big of a deal playing FIFA is to some people.

We’ve lost count of the amount of elaborate apologies FIFA players have had to make after losing to their mates, while many a controller (and more) has been broken in a fit of rage when things go wrong.

END_OF_DOCUMENT_TOKEN_TO_BE_REPLACED

In fact, it wouldn’t be exaggerating to say that the game has been the making and more often the breaking of relationships.

As if to prove that point, have a look at a message sent into us by a JOE reader (who will remain anonymous to protect the identity of his sibling) that his younger brother sent to a mate after a recent break-up. 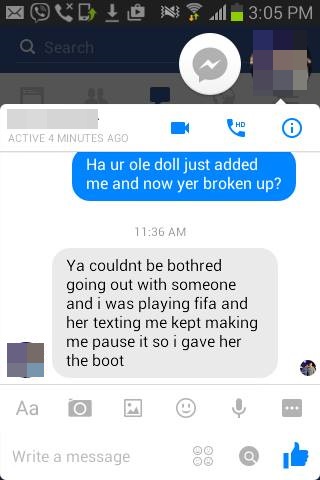 Most sane people would probably say that it’s a bit dramatic and others would legitimately speculate that the relationship may not have been that strong in the first place (the lad in question is 15 after all).

Tough break for the poor girl at the same time; fingers crossed she doesn’t go out with a Football Manager devotee next, those people are on another level altogether.

popular
One of Keanu Reeves' best movies has just been added to Netflix
QUIZ: Can you get full marks in this General Knowledge Quiz?
The 50 most iconic songs of all time* have been revealed
Just in time for Christmas, all eight Harry Potter movies are now available to stream at home
QUIZ: Can you get 20/20 in this desperately tricky capital cities quiz?
QUIZ: Can you get 12/12 in this snappy General Knowledge quiz?
A great underseen thriller is among the movies on TV tonight
You may also like
1 month ago
In conversation with Laura Bailey, one of the most famous performers in video game history
5 months ago
Taking a look at the seven huge games trailers that dropped this week
6 months ago
Returnal is either the best game or the worst game of 2021, depending on what type of gamer you are
7 months ago
New study shows Ireland among the world's top video game cheaters
9 months ago
WATCH: The first trailer for Aliens: Fireteam has arrived
1 year ago
Assassin’s Creed Valhalla review: The best in the series so far
Next Page