PIC: Narcos fans will appreciate the name of a new agent in FIFA ‘16

His methods might be shady but he’ll certainly get bang for your buck.

FIFA 16 was only released yesterday, so those lucky enough to get their hands on it are still familiarising themselves with every little detail.

During a career mode option, JOE reader Gary Kavanagh was a little bit surprised when he came across the name of his agent, who just so happened to be emphasising the importance of him featuring for the Irish national team. 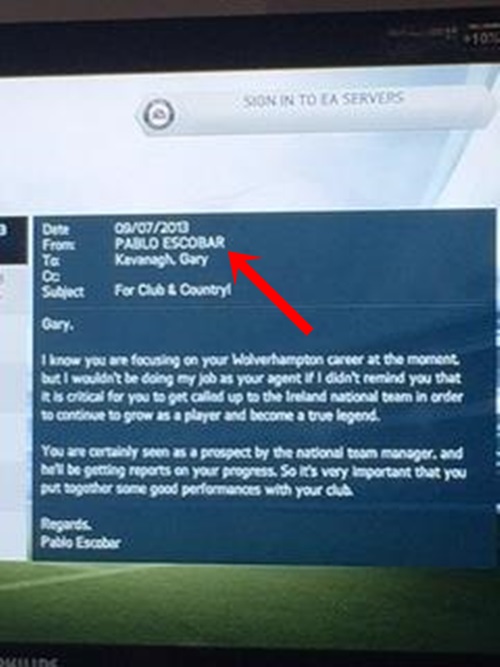 END_OF_DOCUMENT_TOKEN_TO_BE_REPLACED

In his message, Pablo says that all Gary has to do to get a call-up is to continue to perform for his club, Wolverhampton Wanderers.

It's a good job that's all he says too because as anyone who’s seen Narcos or knows a little about Pablo Escobar’s history, he can prove very persuasive by using, shall we say, less straightforward methods.

popular
The JOE Friday Pub Quiz: Week 308
Infant dies after being hit by jeep in Roscommon
Two Irish people arrested in "smuggling event" near Miami
Pilots fly over destination airport at 37,000 feet because they were both sleeping
Netflix has just added 23 very big movies to its library
Multiple fatalities after planes collide mid-air over California airport
Controversial influencer Andrew Tate banned from Instagram and Facebook
You may also like
8 hours ago
The Princess documentary looks to shed new light on the life of Diana Spencer
1 day ago
"It goes off big time!" - The stars of House Of The Dragon tell us what to expect from the new show
1 day ago
One of 2022’s best hidden-gem comedy series is available to stream
1 day ago
Netflix has just added 23 very big movies to its library
1 day ago
The prequel to one of the best twists of all time and 7 more movies & shows to watch this weekend
2 days ago
WATCH: The full trailer for Cobra Kai season 5 has landed
Next Page