The cheat codes for Red Dead Redemption 2 are already available

There are thought to be over 30 cheats in the game.

Red Dead Redemption 2 is finally out and gamers are fast discovering the plethora of cheat codes in the game, offering the chance to utilise perks such as infinite ammo and become permanently drunk. Obviously. 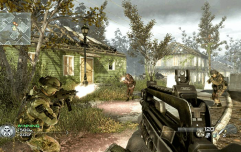 END_OF_DOCUMENT_TOKEN_TO_BE_REPLACED

Unlike more traditional cheat codes, these don't come via a series of button presses in a unique order but instead as a wise old saying, entered after pressing Triangle or Y in the Settings section of the pause menu.

Furthermore, Red Dead requires you buy in-game newspapers for some cheats. These are available after certain story missions and contain the codes within.

Among the best are 'You Flourish Before You Die' which refills health, stamina and dead eye bars. 'A Fool On Command' makes you instantly drunk with 'Better Than My Dog' allowing you to call your horse from anywhere.

Once certain newspapers are unlocked, 'Abundance Is The Dullest Desire' unlocks infinite ammo, 'You Long For Sight But See Nothing' reveals the entire map, and 'Virtue Unearned Is Not Virtue' raises your honour rating.

END_OF_DOCUMENT_TOKEN_TO_BE_REPLACED

You can find the rest of the codes here.

More codes are set to be discovered as players work their way through the 60-hour story, and all else besides, but it remains to be seen if Rockstar have gone to the lengths seen in some of gaming's greatest cheats; such as GTA San Andreas' flying car mode and Tomb Raider II's exploding Lara.

Released on Friday, Red Dead Redemption 2 is set as a prequel to the 2010 hit of the same name, and has already clocked magnificent review scores.

It takes players to the twilight of the American Wild West frontier, specifically the year 1899, following protagonist Arthur Morgan and his time in the brutal Dutch Van der Linde gang.

popular
QUIZ: Can you get top marks in this short but tricky Irish geography quiz?
Nearly 100 flights delayed at Dublin Airport on Monday
4-year-old girl killed in Sligo caravan park named as Alice Dunleavy
The JOE Movie Quiz: Week 166
Grease star Olivia Newton-John has died, aged 73
Man in his 20s in critical condition following assault at public transport stop in Dublin
The Resort is the new must-watch for fans of big murder mysteries
You may also like
2 days ago
Lewis Capaldi and Niall Horan busk together on the streets of Dublin
6 days ago
Mock The Week is coming to an end after 17 years, BBC confirms
1 week ago
The JOE Friday Pub Quiz: Week 305
1 week ago
QUIZ: Can you guess the TV show from the kitchen?
2 weeks ago
The JOE Friday Pub Quiz: Week 304
2 weeks ago
Love Island hit with 3,000 Ofcom sexism complaints over controversial Casa Amor moment
Next Page