Snapchat aren't exactly in everyone's good books these days following the release of their version of the app in recent weeks.

The update did not go down well with many of their users, with petitions started and pleas made to return the app to what it once was.

END_OF_DOCUMENT_TOKEN_TO_BE_REPLACED

The Snapchat CEO, Evan Spiegel, stated, "As expected, it will take time for our community to get used to the changes, but overall, we are pleased with the initial results."

We reckon they are one of the few that are pleased with the initial results, but we all know that people hate change, and we're sure the furrow will settle down in time as people become accustomed to the tweaks in the app.

But some users are reporting that they've lost streaks they've built up with friends due to the new update pushing their friends further down their screen. They've also claimed that they received no notification that the streak was expiring.

Now we're not talking six or seven day streaks here, we're talking about people who've built up hundreds of days of streaks with friends and are very upset to lose their records.

However, Snapchat are offering an appeals section to try and get these streaks back.

To submit a request, please go to: https://t.co/RAHaFTLDAh > ‘My Snapchat isn’t working’ > Snapstreaks 🔥

If you are convinced that a mistake has been made and you have sent a Snap back and forth in a 24-hour period, you can report it here. 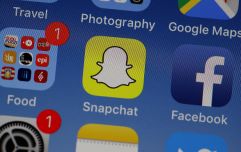 END_OF_DOCUMENT_TOKEN_TO_BE_REPLACED

You will have to file a claim with your username, email address, mobile number, device and friend’s username (you can only do one streak per claim).

Then you will have to list how long the Streak was, whether you saw the egg timer appear and details on the technical issue.

So there's hope for you yet.

popular
Ashton Kutcher opens up about rare disease that left him unable to see or walk
Amazon Prime Video has just added 38 very big movies to its library
The Pogues’ Shane MacGowan rushed to hospital
Rotten Tomatoes reveals the best reviewed movie of 2022
Matthew Perry can't rewatch any of Friends for heartbreaking reason
Lady Gaga's dognapper sentenced to 21 years in jail
The start of the superhero takeover of Hollywood is among the movies on TV tonight
You may also like
3 years ago
Arnold Schwarzenegger releases statement after getting dropkicked at event
3 years ago
New Irish Instagram-style app aims to replace your CV for good
4 years ago
Episode 2 of JOE's Snapchat show Argue Me is live: Tinder or the old-fashioned way?
4 years ago
JOE launches 'Argue Me' — a new show on Snapchat Discover
4 years ago
Plastic surgeons report increase in procedures to make people look more like they do on Instagram
4 years ago
You can now delete messages on Snapchat, here's how you can do it
Next Page