Sony has unveiled an incredible, gigantic 16K television that is as tall a giraffe, and twice as long as the world's longest snake.

4K televisions are generally the highest level consumer TVs available at the moment. This absolute beast has four times as many pixels as those, and 64 times as many as a standard 1080p HD television.

END_OF_DOCUMENT_TOKEN_TO_BE_REPLACED

This means you can walk right up to it, and the image won't look blurred.

Sadly, you won't be able to get this in your living room any time soon. It was announced at the National Association of Broadcasters (NAB) trade show, which is going on in Las Vegas at the moment. The television itself is actually being installed in the city of Yokohama, for the Japanese cosmetics group Shiseido. It is so big it will span two different floors of the building.

Very little 16K footage actually exists, so Shiseido have had to produce their own video of wildlife to show on it.

Sony did previously make a 16K television which was installed at Tokyo's Haneda Airport - but that was actually made out of 16 smaller HD televisions. 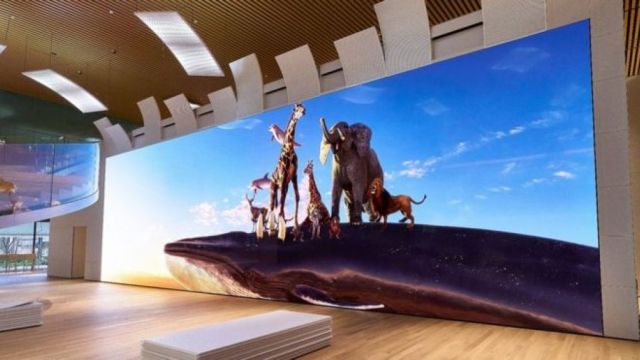 popular
Micheál Martin confirms he intends to return as Taoiseach
The JOE Friday Pub Quiz: Week 314
QUIZ: Step on up and conquer this tricky General Knowledge Quiz
An incredible Western crime drama is among the movies on TV tonight
An Oscar-winning war thriller is among the movies on TV tonight
“Megaproject” MetroLink takes next step towards construction
Johnny Depp/Amber Heard trial movie unveils first trailer and it's not good
You may also like
2 days ago
James Buckley becomes Cameo's first ever millionaire just from filming videos
1 month ago
David Attenborough is coming to Ireland for new nature documentary
1 month ago
Mock The Week is coming to an end after 17 years, BBC confirms
2 months ago
Logan Paul pulled off a high-flying move that left fans stunned at Summerslam
2 months ago
QUIZ: Can you recognise the TV theme tune from just one line?
2 months ago
The JOE Friday Pub Quiz: Week 304
Next Page