We've played the first two hours of the new PS4 Spider-Man game, and we're happy to report it is great

We could be looking at an Arkham beater.

Late July in a secret location in central London, we have been invited by Sony to be the first Irish hands-on players of the new Spider-Man game for the PS4.

The hype around this game has been huge ever since it was announced, with Insomniac Games - the folks behind Ratchet & Clank, Sunset Overdrive, and the Resistance series - working with Marvel on bringing the web-slinger to the console.

END_OF_DOCUMENT_TOKEN_TO_BE_REPLACED

Creative director Bryan Intihar is present, giving a brief presentation before we're given free reign to play the first two hours of the game, and he tells us that the two main pillars of the new game won't be the set-pieces (of which there are plenty) or villains (plenty of those, too), but instead the relationships within Peter Parker's world.

To go too much into those relationships here would (literally) give the game away, but while there are plenty of recognisable faces to be found even within those first few hours and missions, they've all been given a new slant, telling a new story specifically for this game.

Taking a note from the recent standalone movie Spider-Man: Homecoming, we aren't going through Parker's origin story, because everyone knows it already. Instead, we pick it up with Parker already well into his 20's, finished school and college and no longer working part-time at the Daily Bugle.

Instead, when he's not stopping crime in the perfectly rendered New York, he works in a science lab attempting to make some serious technological breakthroughs with the lab's owner by day, and by night he uses it to update his Spidey-suit.

END_OF_DOCUMENT_TOKEN_TO_BE_REPLACED

Immediately, from second one, you feel like you're a super-hero. The fluidity of moving around Manhattan via web-swinging, parkour, and vertical surface runs is handled perfectly, and whenever Parker gets into a tussle, the combat is also superbly implemented. Parker doesn't feel overly powerful, as he often has to use his smarts and his surroundings to his advantage, as the burlier henchmen come equipped with shields, machine guns, and rocket launchers, Spidey has to keep moving, tangling them up in webs or pulling down nearby scaffolding as they walk past in order to take them out.

There is a real vibe of the Batman Arkham games to the combat (and, to a much lesser extent, the traversing around the city), but if you're going to borrow from anything, you may as well borrow from the best.

END_OF_DOCUMENT_TOKEN_TO_BE_REPLACED

Sitting down to speak to Intihar, he admits to being the world's biggest fan of the Arkham games, but is well aware that he is making a very different kind of game, one which the entire Insomniac company was only too happy to get on board with.

"During a company meeting, Ted Price [CEO of Insomniac Games] was giving a presentation, and during it he brought up an image, and it was just the Marvel logo, and the entire company just gasped with excitement," he said.

Which is exactly the kind of reaction you want when making a video-game about Spider-Man, because Spider-Man is one of the more excitable, enthusiastic and optimistic superheroes out there. Unless Batman (and his Arkham games), there is no brooding darkness.

However, some of the more recent huge hits on the PS4 - including God Of War, or The Last Of Us - have sold themselves on being deathly serious, and are in turn then taken more seriously. Might that be an issue with the Spider-Man game, seeing as how he is such a fun character.

Was there any point in the game's creation when someone thought 'Dark is what is in right now', and make Parker a bit grimmer?

Intihar says no, using the big screen as a comparison: "Infinity War is a pretty dark film if you think about it. But it is also very funny. It has very engaging characters, very entertaining characters being funny at the right time, in between some seriously heavy and dark events. That is the balance that we tried to strike with this game, too."

From the part of the game we've played, we can safely confirm that they have nailed it. 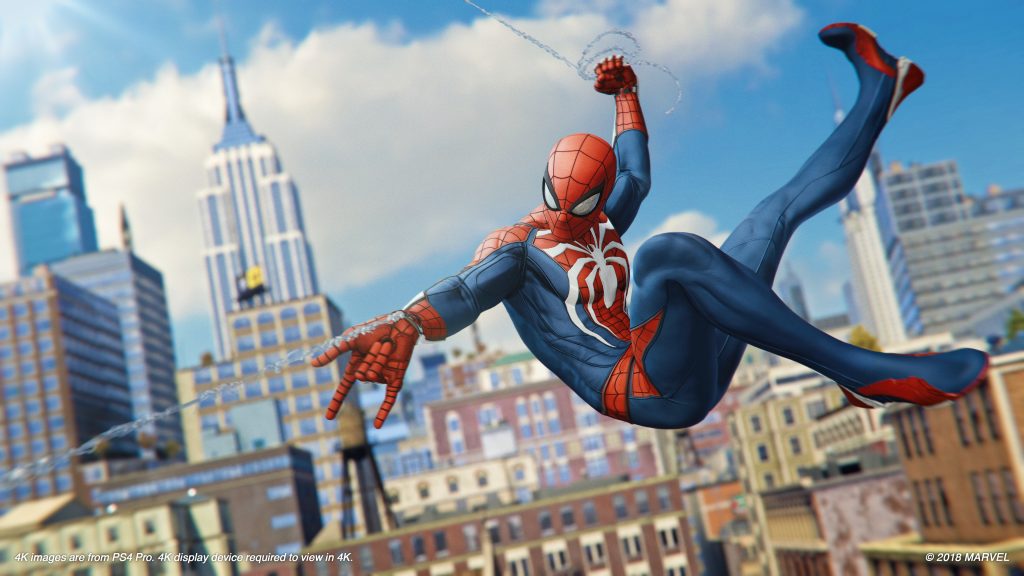 This version of Spider-Man is very funny, his witty one-liners in between bouts with baddies are brilliantly written, and performed even better by actor Yuri Lowenthal (best known as Alucard in the Castlevania series), who also fantastically captures the more low-key and introvert aspects of Parker when he's out of the red-and-blue onesie.

From the footage already released, we know that the members of the Sinister Six will be in play, as well as the game's big baddie Mister Negative, not to mention the series regulars like Aunt May, and Mary Jane, here re-imagined as an investigative journalist, and who was a playable character during those first two hours.

Intihar also gave us glimpses of the Avengers Tower, hinted at the Wakandan Embassy, and said there would be plenty more hidden throughout the city. We asked did he have any famous voices come on board to play some of the supporting characters, but he answered with little more than a sly grin and a shrug: he wasn't spoiling anything ahead of the players finding it out for themselves.

By the end of the two hours of gameplay, we were fully hooked and couldn't wait to get our hands on the rest of it, and we really wanted to know if there was a specific sequence or set-piece or plot-point within the game that Intihar himself was waiting for players to get to and react to.

Marvel's Spider-Man will be released on the PS4 on Friday 7 September.

popular
The JOE Friday Pub Quiz: Week 300 - the Triple Century
One of the most underrated sequels of all time is among the movies on TV tonight
Met Éireann gives update on weather warnings for this weekend
A classic Western is among the movies on TV tonight
Rain and thunderstorm warning extended to include 15 counties
An underrated Jason Statham thriller is among the movies on TV tonight
New horror movie trailer has one of the best jump scares in years
You may also like
3 months ago
Exoprimal has the greatest plot for any video game. Ever.
3 months ago
Elden Ring has the third-highest review score in the history of video games
5 months ago
16 of the most-anticipated games arriving in 2022
7 months ago
In conversation with Laura Bailey, one of the most famous performers in video game history
1 year ago
Taking a look at the seven huge games trailers that dropped this week
1 year ago
Returnal is either the best game or the worst game of 2021, depending on what type of gamer you are
Next Page