If EA accede to this request then Adebayo Akinfenwa, or ‘Beefcake’ to his mates, might just be unstoppable when the new FIFA rolls out next month.

They’re not the be all and end all, but FIFA ratings are a fairly reliable barometer of the quality of a player; just as in real-life, Messi and Ronaldo are the top dogs, Manuel Neuer is probably the best keeper, Theo Walcott is one of the fastest players, Luis Suarez is one of the best finishers and so on and so on.

To find the strongest player in FIFA 14, however, you had to trawl down through the leagues until you came across the rather imposing figure of AFC Wimbledon striker Adebayo Akinfenwa, a behemoth who’s just short of six foot and 16 stone and whose fearsome power earned him a strength rating of 97 in FIFA 14. By way of comparison, Bale and Ronaldo, two of the fastest players, have a speed rating of 93; the fastest is Mathis Bolly (who?) of Fortuna Dusseldorf on 97.

END_OF_DOCUMENT_TOKEN_TO_BE_REPLACED

Of course, EA had to compensate in other areas to arrive at Akinfenwa’s overall rating of 63, with the result that his sprint speed rating was just 54 and his acceleration a tortoise-like 34; sure he might be strong, but if he’s too slow to arrive in the box in time then he’s not much good now, is he?

Akinfenwa only became aware of FIFA and his status as the strongest player in the game last year and now he’s not happy with simply being the must muscular presence in a game that is becoming more and more life-like with every passing year.

Speaking to the Daily Telegraph recently, Akinfenwa said: “I didn’t realise how big FIFA was until last year. I’d always been one of the strongest players in the game, but officially in FIFA 14 I was the strongest in the world. If they say so, I must be. I like that.

“I’ve played as myself a few times and I’m very slow. I’ve asked FIFA to make me a little bit quicker, but you can’t have everything. I’ve always been big, my brothers are my size, we come from good stock.”

While EA are at it, any chance they can incorporate a Hulk Hogan-style celebration for Akinfenwa as per the picture below… 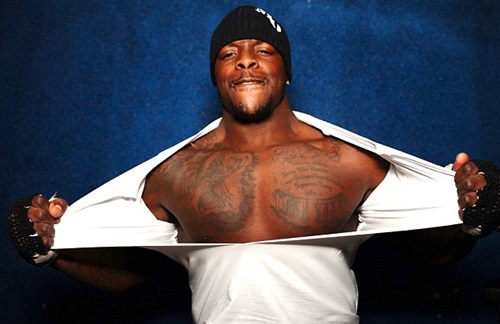