Apple has been dethroned as the most valuable brand in the world by mammoth search engine Google in an annual study of the world's leading brands by Brand Finance.

The creators of the iPhone had been top of the list for the last five years but suffered a 27% drop in brand value over the last 12 months to lose their spot at the top of the table.

The report states: "Apple has over-exploited the goodwill of its customers, it has failed to generate significant revenues from newer products such as the Apple Watch and cannot demonstrate that genuinely innovative technologies desired by consumers are in the pipeline."

Google's brand value, on the other hand, went up by 24% over the last year taking their brand value to a staggering $109.5bn.

The report outlines how Google is largely unchallenged in their core search engine business and their advertising revenues rose sharply last year.

The third spot on the list is taken by Amazon who remain unchanged from their position from last year.

Facebook ranks in at a surprisingly low number nine, but this is a dramatic improvement on 2016 when they were in 17th spot.

These are the top ten most valuable brands in the world... 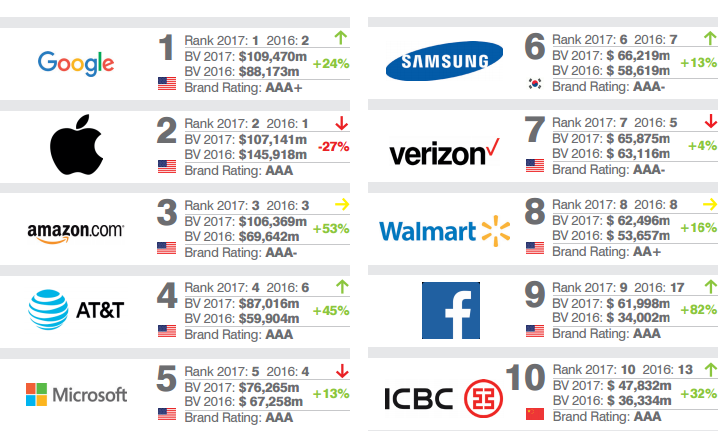 
popular
Tayto have launched two brand new crisp flavours for you to get stuck into
Study shows it takes men four months of dating before they’re happy to share food with their partner
Here are all the best new titles coming to Netflix in March
Met Éireann issues status yellow rainfall warning for four counties
QUIZ: How well do you remember these classic PS2 games?
The story behind Netflix's latest true crime documentary is absolutely off-the-wall bonkers
It's Week 20 of JOE's 19 in 90 quickfire quiz
You may also like
16 hours ago
Woman plays violin while surgeons remove tumour from her brain
22 hours ago
A breakdown of the radical new immigration points system proposed for the UK
2 days ago
Irish passengers are on board two ships where the coronavirus has been detected
4 days ago
R. Kelly faces new charges alleging sexual abuse against a minor
1 week ago
242 new deaths recorded on deadliest day of coronavirus outbreak
1 week ago
113 animal species require "urgent help" following Australian fires
Next Page