Video: This baby is a much better driver than you’ll ever be

Anyone who has ever played a competitive online multiplayer game will know what it’s like to be bested by someone who is much, MUCH younger than you. Play a quick game of Call of Duty and you’ll soon know what we mean.

Having 13-year-old prepubescent boys claiming to have slept with your mother moments after they snipe you from a mile away is one thing, but just wait until you see the incredible rally driving skills from this baby. 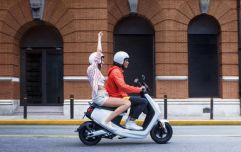 END_OF_DOCUMENT_TOKEN_TO_BE_REPLACED

The kid will make you never want to touch a controller ever again.

If you’ve ever lost in a race on Dirt, or any online rally game for that matter, and your opponent starts babbling incoherent gibberish down the mic then you’ve more than likely been racing against this kid… or else it's someone who has been playing the game for 72-hours straight, in which case you should probably find them some help.

The Big Reviewski || JOE · The Big Reviewski with Dune, a mini-Hangover reunion & the best of Timothée Chalamet
popular
Report: Crew left Alec Baldwin film set in protest before fatal shooting
The JOE Music Quiz: Week 78
The JOE Friday Pub Quiz: Week 266
Here's the line-up for tonight's episode of The Graham Norton Show
9 of the best horror movies on Netflix right now
QUIZ: Time to get down to business with this General Knowledge Quiz
The 50 most iconic songs of all time* have been revealed
You may also like
1 month ago
QUIZ: How well do you know your car logos?
4 months ago
The ultimate checklist of everything you need for your next Irish road trip
5 months ago
The iconic 'Bus W***ers' car from Inbetweeners is now up for sale
6 months ago
Two killed after Tesla car crashes with no one in driver's seat
6 months ago
Over 170 cars clocked speeding on Irish roads in first two hours of National Slow Down Day
7 months ago
Ireland's first average speed cameras to be introduced on mainline motorways
Next Page